I got a Letter from God…
…and it was really creepy.
I’m not usually interested in posting the “religion sucks” kind of threads, but sometimes the outrage gets to be just too much to ignore. A few days ago this arrived in the mail: 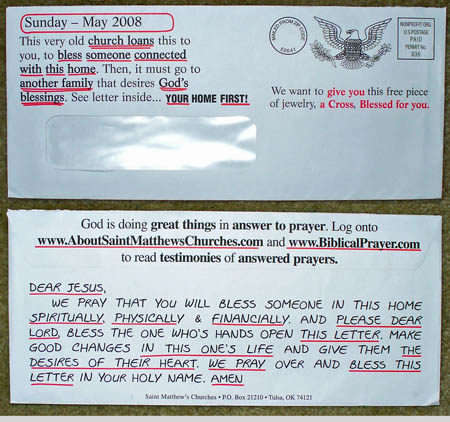 The envelope is covered front and back with gushy prayers and promises for my spiritual, physical and financial blessings, in all-caps with half of the words underlined in red. It is from the Saint Matthew’s Churches, apparently a very large organization centered in Tulsa, Oklahoma with a very large church in Texas and a very large website with over 80 pages.

A Google search for “saint matthew’s church tulsa” results in dozens of sites complaining and warning of rip-offs and scams by this place. Things get confusing because there are also hundreds of Saint Matthew’s Churches around the world that are not connected in any way to this group.

The envelope contained several pages of effusive wishes for my prosperity, prayers, snips of scripture, saccharin pictures and the expected testimonials about how people’s prayers, brokered by Saint Matthew’s, had been answered. Of the five testimonials, one was about someone’s leg pain disappearing and the other four were about getting cash, with heavenly largesse ranging from $5,000 to $46,888.20. (It’s reassuring to know that the Angels of Accounts Payable get it down to the very penny.) So it was clear to which of my various base motives they were trying to appeal.

A sealed page contained a letter to me directly from God, but he didn’t sign it. (Damn. That autograph would have made me a bundle on eBay.) Guess what? God types in all caps. I FIGURE HIS VOICE IS REALLY, REALLY LOUD SINCE HE’S GOD AND ALL, AND SO THAT IS HOW HE HAS TO TYPE.

(ahem) There was a check-off list of several things I could have the good people of St. M’s pray for on my behalf, ranging from saving my soul through many material benefits to a dollar sign with a long blank line where I could fill in whatever amount I want. Almost as an afterthought they added a space where I could donate money to their church. One might think that if they were so good at convincing God to give others so much moola, they wouldn’t need small donations from humans.

Normally I would have simply tossed the whole thing in the trash, but this caught my eye:

It’s an eleven by sixteen inch “prayer rug” that I was told to kneel on, pray on and then send back to the church so someone else can use it too. Mine was not wrinkled, so it must not have been a “pre-owned” prayer rug. It said it was “soaked in the power of prayer for you.” Soaked? I sniffed it and held it up to the light. Apparently the power of prayer is odorless and doesn’t stain paper. I was also instructed to stare at the closed eyes of Jesus and after a while I would see his eyes open up and look back at me! Well, I didn’t try the kneeling but I did try the staring.

Here is the truly cynical and diabolical part of this scam. As I stared at the face, slowly I began to see his eyes looking back at me! Extremely faint traces of irises and pupils had been subtly rendered onto the closed lids, taking advantage of a visual phenomenon where our retinas become fatigued after staring at a blank space and we begin to pick up low contrast details not noticed before. The effect doesn’t show up well on these internet jpg’s but I have enhanced the image here so you can see what I saw:

The effect was amazing and creepy. As an artist I was impressed but as a human I was really pissed off. The cynicism required to produce this very clever, carefully executed trick goes far beyond some preacher who sincerely believes his creed, wants to share it with others and needs some donations. There is a line that winds its convoluted way between promoting one’s beliefs out of devotion and an attempt at conscious, calculated deceit.

I realize there are many of these rackets but this is the one that came to my mailbox so I’m venting my disgust. This is a deliberate, shameless attempt to take advantage of unsophisticated folks who probably don’t have much money to spare. Some people might say there’s a sucker born every minute and for their stupidity they deserve abuse, but I cannot see how any person of conscience, whether theist or atheist could condone such a callous victimization of anyone, no matter how foolish, naïve or backward they might be.

May 27, 2008 Why Do You Blog?
Browse Our Archives
What Are Your Thoughts?leave a comment