The Best Church of God… No, Really

Now here’s a church I could get on board with.

A number of people, religious and not, have already attended services.

Just to give you a preview: It’s located directly above Chicago’s Second City comedy haven… 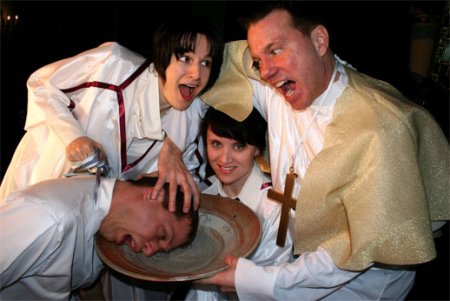 From the Chicago Sun-Times article by Mike Thomas:

… the interactive and sometimes hyperactive Best Church (www.bestchurchofgod.org) isn’t your typical religious gathering place. Not unless your typical religious gathering place hosts sermons that warn against the evils of yeast, employs Shake ‘n Bake in the transubstantiation and offers turkey jerky (the body) and red fruit punch (the blood) for communion.

Original hymns such as “When God and Satan Fight,” apocalyptic proclamations and frequent cash collections (they don’t sell tickets) round out the smartly staged sacrilege that changes from week to week.

“Our ultimate goal is to blur the lines between satire and reality and create an actual living, breathing, satirical community to create a home for atheists and agnostics and the otherwise religiously disenfranchised,” says Best Church creator, director and piano player Mike Descoteaux.

For 21-year-old Chicago college student Scott Elam, attending the Best Church has become an almost-weekly ritual. He grew up “in and out of Southern Baptist churches” and attended a church in Louisville before moving to Chicago last March.

“I guess I’m maybe not as convinced in my atheism as the show is, but I think it’s a lot of fun,” he says.

The research for the show was conducted by visiting a variety of churches in and out of Chicago.

“What’s been really surprising to me is the number of folks in the audience who consider themselves to be religious and who do ascribe to a mainstream denomination of one sort or the other who are coming and still thoroughly enjoying the show,” Descoteaux says. “I was really, at the outset, expecting this show to shut them off.”

And here’s the best part of the article:

Practicing Presbyterians Clifford Nelson, 50, and Dawn McGrath, 49, of Arlington Heights were among the nearly sold-out crowd of enthusiastic congregants last Sunday. “We ditched church today,” Nelson said afterward. “And, in fact, we’re bringing this to our pastor to share with him,” he added, holding up a Best Church program. Its cover featured the face of Jesus on a piece of toast.

Want to give a donation?

Religion isn’t free, folks. If the Lord had intended for your spirituality to be a charity case, He wouldn’t have instated a 10% tithing payable directly to the Tribe of Levi (see book of Numbers. Or any book in the Old Testament, really). The Tribe of Levi has sadly lost favor in the eyes of God, but our 110% Jesus Approval Rating makes us the next best candidate for your mandated contribution.

The Holy Trinity invented Paypal so you could more easily uphold your covenant with the Almighty. We suggest giving in amounts commensurate with your desire for salvation.

If you don’t help cover our expenses, who will? The Jews? Come on.

I *need* to check out this show soon… who’s in?