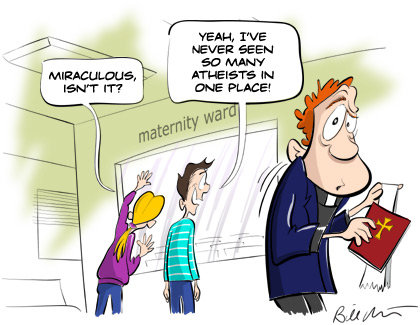 Yep… the pastor’s reaction is pretty much how we atheists feel when a religious couple says they have a “Christian” or “Catholic” child. It doesn’t make a lot of sense. The children are not yet old enough to know what they are.

It’s a point that Richard Dawkins makes very clear in The God Delusion.

That said, I’d say there’s some truth to this picture (of “atheist” children). The kids have not yet been inculcated with religious doctrine. They haven’t been told to believe in God.

As far as I’m concerned, children are atheists unless they are taught otherwise or they begin to think for themselves that there must be a higher power out there. Probably the former, though…

(via Too Many Tribbles)