Word on the street is that John McCain is meeting with potential running mates this coming weekend.

Among them: Mitt Romney… Governor Charlie Crist of Florida… and Governor Bobby Jindal of Louisiana.

Not because I think McCain will have a strong enough ticket to beat Barack Obama. But because of that third option.

Of all the names being mentioned as McCain’s potential running mate, Piyush “Bobby” Jindal, the 36-year-old first-term governor of Louisiana, is not only the youngest and least experienced, but also the only one who is not white. Yet in a year in which Democratic voters have raised few objections to such traditional “obstacles,” Jindal may be especially attractive as Republicans seek a way to offset the “post-racial” and youthful appeal of Senator Barack Obama.

Jindal, who was born in Baton Rouge to a family that had just arrived there from the Punjab area of India, took office in January after serving three years in the House of Representatives. In a race with four candidates, Jindal, who was born a Hindu but converted to Roman Catholicism as a teenager, won 54 percent of the vote after campaigning as a social conservative… 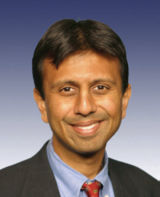 I hope that doesn’t happen. For purely selfish reasons.

Do you have any idea how annoying it would be to deal with 293847293 Indian family members and friends talking about how wonderful it is that a desi has a legitimate shot of going to the White House? You can bet that many Indians will overlook his positions and just look at his skin color.

Not a dream. *So* not a dream. It’s not a dream to have another Republican in power who’s going to further ruin this country… and have it be the most famous Indian person in America.

While many Indians will be proud, I’d have to argue how he’s bad for our country every step of the way.

(The analogy isn’t quite the same, but I also wouldn’t want to be a black man telling other black people to vote against Barack Obama.)

Why am I not supporting Bobby Jindal as Vice-President?

A little more on his Intelligent Design position.

In a gubernatorial debate that took place on September 27th of last year, this is what went down:

Baton Rouge Advocate columnist Carl Redman: “What about intelligent design? And the issue really is, it’s not what’s on the books, but if this comes up again. Because this state has wrestled with creationism and spent a lot of time and resources. I was covering the legislature for a couple years when they wrestled with the abortion issue. It could come back at any time. What the governor does is very critical [in those fields?].”

Jindal [nodding]: “Sure, and let’s talk about intelligent design. I’m a biology major. That’s my degree. The reality is there are a lot of things that we don’t understand. There’s no theory in science that could explain how, contrary to the laws of entropy, you could create order out of chaos. There’s no scientific theory that explains how you can create organic life out of inorganic matter. I think we owe it to our children to teach them the best possible modern scientific facts and theories. Teach them what different theories are out there for the things that aren’t answerable by science, that aren’t answered by science. Let them decide for themselves. I don’t think we should be scared to do that. Personally, it certainly makes sense to me that when you look at creation, you would believe in a creator. Let’s not be afraid to teach our kids the very best science.”

According to science advocate Barbara Forrest:

Jindal’s remarks, which clearly signal his support for teaching ID, are a study in incoherence. On one hand, this Rhodes scholar wants “the very best science” taught to children. On the other, his assertion that children should be told “what different theories are out there” in order to explain what science cannot is an admission that ID is not science. His inference of a creator from “looking at creation,” while legitimate as a personal religious belief, is at odds with his statement that “our kids” should be taught “the very best science.” Putting the two together in a public school science class violates not only the standards of responsible science teaching but the U.S. Constitution as well.

It’s easy to say I’m dismissing him for simply being a conservative Republican, but it’s more than that.

Despite his success in Louisiana politics, he’s an embarrassment to many Indian people. He doesn’t share the values so many of the rest of us do.

The culture I grew up in encouraged a strong education — especially in the sciences. He throws solid science out the window.

I was taught to respect all people and to stand up for their rights. As a minority, you hope others will do the same for you. Yet, he routinely advocates anti-gay, anti-woman policies in favor of socially conservative, irresponsible positions.

Of course, these values along with many others aren’t limited to just the Indian culture.

But how did it happen that the most prominent politician among us had to be the anomaly?

May 22, 2008 Martin Marty and Krista Tippett on Fundamentalisms
Browse Our Archives
What Are Your Thoughts?leave a comment