A lot of you may have already read the excerpt from Matt Taibbi‘s new book The Great Derangement in the current issue of Rolling Stone or throughout the atheist blogosphere.

If not, you at least owe it to yourself to read a couple of his Campaign 2008 articles for RS.

Taibbi is also a frequent correspondent on HBO’s Real Time with Bill Maher. 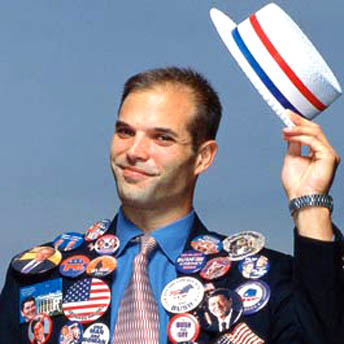 He recently spoke to me about his new book, religion and politics, and the New Atheists.

Hemant Mehta: In your book, you go undercover to a Christian church retreat and share anecdotes of the people who attended; you say they’re “beyond suggestible” when it comes to thinking differently from what their pastor tells them. Do you think there is any “cure” for them? Is there any way to teach them to think critically at that stage in their life?

Matt Taibbi: The reason many of these people turned to this kind of religion in the first place is because critical thinking turned out to be not such a positive experience for them. The very appeal of the religion is the surrender of that tiresome responsibility. The only way these people are going to reject that lifestyle is if it turns out to be ineffective in helping them negotiate the logistical problems of their lives. It’s similar to being a drug addict — until you run out of money/come down with AIDS or liver problems/develop too high of a tolerance, why stop taking the drug? But generally speaking I think the way to approach the problem is to get to people before they join these churches. These pastors find people who are miserable and lost and alone and get them to join their ranks; if there were more opportunities for people, or if people had more of a say in running their lives, I think they wouldn’t turn to these religions so much. One of the premises of the book I just wrote is that people have so little input into our national politics — a system that really only works for the monied insider class — that people have become alienated from the secular/political world and have retreated into various conspiratorial doctrines, on both the left and the right. We fix that, and maybe this goes away a little.

HM: Are there any Christian churches that support the notion of questioning what is said by the pastor?

MT: Well, there are certainly some religions that encourage intellectual curiosity more than others. Catholics are at least encouraged to be educated, to read books other than the Bible. You don’t see that in these fundamentalist churches.

HM: Do you think that pastors like John Hagee and the late Jerry Falwell are rising in popularity or are even Christians getting sick and tired of them?

MT: I think there are a few things at work. Overall, young people are less and less religious every year. The numbers for 16-29 year-olds go something like this: about 60 percent now call themselves Christian, and that compares to about 78 percent of Americans over 60 who call themselves Christian. But I’d bet that of those who are religious, relatively large numbers of them are going to megachurches of this sort and foreswearing the less extreme forms of the religion. I remember visiting southern Ohio on a story about the congressional race between Jean Schmidt and Victoria Wulsin and finding most of the small protestant churches in the district — a district that had a booming population thanks to high numbers of carpet bagging out-of-towners flocking to new corporate campuses — rapidly losing parishioners to the giant, McDonald’s style megachurches newly erected in the area. The population is now increasingly suburban and you have more people moving from place to place to chase jobs. For those people, it’s easier to just slide into a generic giganto-church with a big local TV presence than it is to root out some smaller church. It’s like anything else — if you’re in a strange place, are you going to shop at Home Depot, or will you take the time to find the mom-and-pop hardware store? And the megachurches are built around charismatic leaders of this sort. So I’d say it’s half-and-half — they’re losing popularity as a share of the whole population, gaining as a share of the religious demographic.

HM: What role should religion play in the political arena?

MT: Well, I’m an atheist/agnostic, so I would say none. People should stick to solving the problems they have the tools to solve. If you have a budget crisis, well, human beings can do the math, work out a new tax/spending strategy, and fix that. But we don’t have any tools for [divining] the will of God as it relates to, say, a new problem like high school shootings, the Iraq war, or the AIDS virus. All we have are the opinions of religious leaders whose motives may or may not be pure, and whose grasp of logic may or may not be of the highest quality. If you inject religion into the equation, the debate is necessarily going to be subjective, emotional, and inconclusive. It’s also very easy for unscrupulous people to use religion to further various ends for other reasons. Hagee’s humping of Israel is a great example. How do you get fundamentalist Christians to support the financial subsidy of/military aid to a Jewish state? Easy; you convince them the world is going to end soon, and that we’re going to be on the wrong side of Armageddon unless we support Israel.

HM: How strong will the Christian support be for John McCain in the upcoming election?

MT: Yeah, I don’t know. I’ve heard some ugly stuff about McCain in those circles. Then again, Hillary isn’t too popular either. In my church they taught us that Hillary’s first act as president would be to tax the churches. So McCain may get some support by default. As for his relationship to Hagee — that’s purely an AIPAC (Israeli lobby) relationship. Both are heavy AIPAC guys. It has nothing to do with religion.

HM: If McCain won the presidency in 2008, what sort of role would the Religious Right play in the next administration? Would it be any different from its current role in the Bush administration?

MT: I suspect it would be greatly reduced. McCain isn’t a true believer like Bush. McCain can barely conceal his annoyance at certain concessions he has to make to political reality, and religion is one of the things that seems to annoy him. I can’t imagine him having prayer breakfasts and that sort of thing a la Bush.

HM: Following up on that, if either Hillary Clinton or Barack Obama won the presidency, what role would religion play (politically) over the next several years?

MT: Let me put it this way — I doubt Jeremiah Wright will have much of a role. If Obama gets in, one of his first actions will be to get NASA to shoot Wright into space. Hillary will believe whatever the polls tell her to believe. Her real religion will be the church of the Pew/Gallup survey.

HM: What comes to mind when your read each of the following?

MT: I used to agree with it wholeheartedly. The idea of making belief in God socially unacceptable made sense to me. Now I’m not so sure. The real crime of religions, it seems to me, is the arrogance religious leaders display in being so confident about the nature of the universe. Atheists can display the same arrogance about their beliefs. When people ask me what I believe about God, I tell them the truth, which is that I have no fucking idea. Obviously there are aspects to the human experience that are beyond our comprehension. Otherwise we wouldn’t all be so miserable/ridiculous all the time. I think the best thing to shoot for is a situation in which people are simply comfortable with the fact that life is a great and endlessly confounding, often very (painfully) funny mystery. The New Atheism sometimes seems to me to reject the idea that anything is unknowable — which, to me, if it were true, would be very sad.

MT: A hilarious and deeply twisted book, which in parts is poetic and in other parts so disturbed as to be almost incredible. The first time I read about those guys knocking on Lot’s door and demanding sex with those angels — and Lot offering his virgin daughter to them in their place — I wondered if the people who wrote this stuff were sane at all. Some of that stuff is pure comedy and it’s amazing to me that people don’t see through it. For instance, the subsequent scene where Lot is in the cave, and his daughters get him drunk and bang him in order to (they think) propagate the species — how can you read that and not see it as some elaborate story cooked up by Lot later on? “Well, we were in this cave and we thought the whole world had ended and I was the last man on earth, and I was drunk… It’s not like I was molesting my daughters or anything! After all, they came on to me!” I wonder even more about the people who read, say, the story of Abraham and Isaac and commend Abraham for being willing to sacrifice Isaac. What sane person doesn’t read this and wonder why anyone would worship a God who pulled such vicious and sadistic stunts? That stuff flips me out.

MT: Yeah, see above about the New Atheism. I get what he’s saying. I’m just not sure about the tone.

MT: An intellectual absurdity. What’s odd to me about Intelligent design is that belief in it requires Christians to accept so much science that they might as well just accept the theory of evolution as a whole. I never understood the hostility toward evolution — except insofar as religious leaders always condemn anything they can’t really understand.

MT: Can’t stand it when the Pope comes to America and everyone goes gaga over him. Last week they preempted a Lakers game in my area to cover his sermon in Yankee stadium. That was enough for me to hate him forever.

HM: How soon will it be until we see more openly non-theistic people (such as Rep. Pete Stark (D-CA)) get elected to higher public office?

MT: I’m not holding my breath. Atheism is the last taboo in American politics. I’m not saying it can’t happen, but it probably won’t be soon.

HM: What should atheists groups (like the Secular Coalition for America lobbying group) be doing to get a seat at the table in American politics?

MT: Hard to say. The problem atheists have is the same problem everyone has — there’s a monopoly on power held by the Republican/Democrat clan, and it’s been hard for any outside group to break that cycle. I think atheists probably need to work on the concept of dissenting parties getting a voice before they can get their specific agenda on the table.

HM: Should atheists be respectful, if not accepting, of Christian beliefs?

MT: That’s a good and difficult question. In the end, I think the answer is no. You can be kind to a person who, say, reaches forty and still believes in Santa Claus. But you don’t have to respect his beliefs. Religion for quite a long time has benefited by the respectful acquiescence of nonbelievers. I know I’m getting close to the views of the New Atheists I just criticized, but I think it might help if religion were made more generally ridiculous.

HM: What would Jesus do?

MT: He would puke into his cloak if he could see how things turned out.

The Great Derangement comes out on May 6th.