Pastor Roger Byrd of the Jonesville Church of God in South Carolina recently put up this sign: 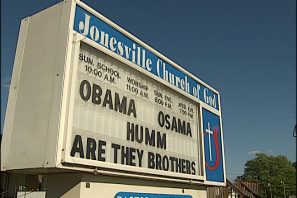 I know, I know. I couldn’t believe it either. We all know the proper spelling of the word is “HMM.”

Pastor Byrd was asked why he put the sign up:

Pastor Byrd says the sign is not meant to be racial or political but rather to make people think. “His name is so close to Osama I have a feeling he might be Islamic therefore he doesn’t recognize Christ,” Pastor Byrd said.

He has a feeling?! Well then, don’t bother looking into the matter at all. No research necessary. Your gut settles everything…

You would think his congregation would speak out against this. Surely someone who attends the church would note how obscenely wrong this sign is, on so many levels.

By the way, the church has no African-American members.