May 1st marks the 75th anniversary of A Humanist Manifesto. 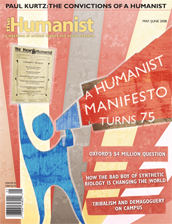 Fred Edwords, the director of communications for the American Humanist Association, explains its significance (emphasis mine):

Adolf Hitler was appointed chancellor of Germany in January, Franklin Delano Roosevelt was inaugurated as president of the United States in March, Mohandas Gandhi carried out a hunger strike in May on behalf of the lower castes of India, the Vatican signed an accord with the Nazi regime in July, physicist and humanist Leó Szilárd conceived of the nuclear chain reaction in September, and the Twenty-first Amendment to the U.S. Constitution, repealing Prohibition, went into effect in December. This was 1933, a watershed year in history when both humanistic and anti-humanistic trends were sprinting from opposing starting lines, heading on a collision course that would transform the world by mid century.

… this statement of seventy-five years ago was an expression of a scientific and technological optimism, and the spirit of social reform and revolution that had been growing since the middle of the nineteenth century. It was also a culmination of liberalizing traditions within American religion, as blended with popular freethought and deepened by early twentieth-century innovations in philosophy. This first humanist manifesto — comprised of fifteen affirmations on cosmology, biological and cultural evolution, human nature, epistemology, ethics, religion, self-fulfillment, and the quest for freedom and social justice — delineated the leading ideas and aspirations of its day.

Though values have since been added to the humanist principles set forth in the first manifesto, and while the overall philosophy has been further universalized and secularized, the thirty-four signers of 1933 would not only recognize their humanism in the humanism of today, they would embrace it — as indeed they embraced those evolutionary changes they witnessed during their lifetimes.

The original Manifesto can be found here.

There’s also something to be said for the title. It’s not The Humanist Manifesto. It’s A Humanist Manifesto. The original writers of the Manifesto knew that their ideals may change over time. They knew this would not be the final version and that it shouldn’t be written in stone.

Unlike some other texts I could mention…