I Don’t See Any State/Church Violation…

But this story is still disturbing. 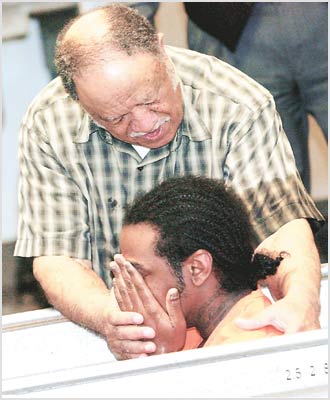 Nearly a third of the inmates in the Creek County Jail were baptized Thursday night in a corrugated steel horse trough set up in the jail’s kitchen.

Seventy men and 12 women were baptized Wednesday, the second time baptisms have occurred in the new jail, which opened nearly three years ago.

The Rev. Luis Torres, chaplain of the Creek County Jail and pastor of the First Assembly of God in Sand Springs, said a baptism was held in the old jail six years earlier.

He attributed the high number of baptisms to the work of the 75-some volunteers who lead worship and teach Bible studies at the jail and to convicted inmates’ realization that they soon will leave the jail for hard time in prison.

“And,” he said, “in the last four years, there’s been a surge of the move of God, a revival. Inmates that have found the Lord are telling other inmates about it.”

Inmates are not allowed to be baptized until they have gone through an orientation, with teaching about the meaning of baptism, and have “accepted the Lord Jesus Christ as their savior and want to follow him,” Torres said.

As far as I see, no government money is going into this. No one is forcibly baptised. If atheist volunteers wanted to go into the prison and talk to inmates about reason and evidence, they would probably be able to do so.

So why do I get a queasy feeling while reading this?