The Cumberland County Courthouse in Tennessee has several expressions of free speech on its front lawn.

The displays include an Iraq and Afghanistan Soldier’s Memorial, Statue of Liberty, chainsaw-carved monkeys and bears, Jesus carrying a cross, and the most recent display added — a Flying Spaghetti Monster.

Yep. An FSM sculpture has been added to the mix: 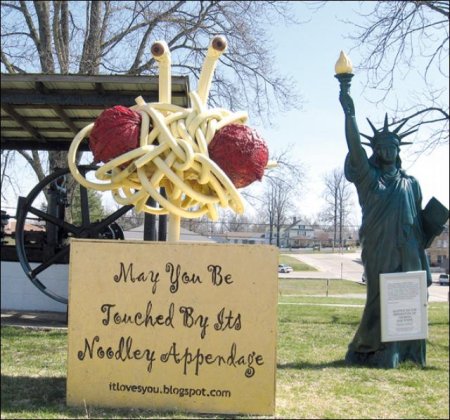 The FSM sculpture was created by David Safdie and (sister) Ariel Safdie.

We are lucky enough to live in a country that allows us, its citizens, the freedom of speech. I have chosen to put up a statue of the Flying Spaghetti Monster to represent the discourse between people of all different beliefs. The many faiths, ethnicities and backgrounds of Cumberland County’s residents make our community a stronger richer place. I respect and am proud that on the people’s lawn, the county courthouse, all of these diverse beliefs can come together in a positive dialogue. Here, we are all able to share the issues close to our hearts whether it is through a memorial to the soldiers killed fighting for our country, the Statue of Liberty honoring our nations welcoming promise to all, a group’s fight to stop homelessness, or powerful symbols of faith. I greatly treasure this open forum between everyone in the community.

The Flying Spaghetti Monster is a pile of noodles and meatballs, but it is meant to open up discussion and provoke thought. Being able to put up a statue is a celebration of our freedom as Americans; a freedom to be different, to express those differences, and to do it amongst neighbors -— even if it is in a noodley way.

What has County Mayor Brock Hill said about this?

We are basically operating it as a freedom of speech venue. We don’t deny the constitutional rights of anyone, but we certainly don’t endorse all the displays. I feel the Flying Spaghetti Monster is an effort on the part of non-Christians to try and minimize Christianity and the images that have been placed there. I’ll go as far as to say that I think it’s an attempt to minimize and ridicule the good intentions of Christians in Cumberland County, but I don’t deny their right.

With all due respect Mayor Hill- the Flying Spaghetti Monster sculpture is not an attempt to ridicule any religion. It should not be used as an opportunity to play the values of one religion off another. And I think if you read the comments on this blog, it is clear that many many people in our county understand that symbol and agree. Rather, the Spaghetti Monster is intended to create discourse on the role of religion on public property.

Spaghetti and meatballs is meant to bring a touch of levity to a serious discourse. The statue has no intention to ridicule. It calls attention to a situation that has deeply concerned many residents over the past two years. Whether made of wood or spaghetti all religious statues are inappropriate for our courthouse lawn.