Check out this billboard: 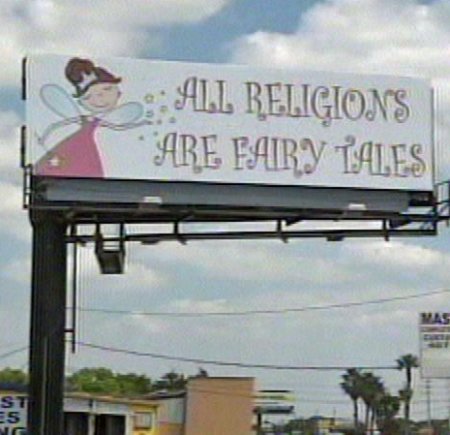 It’s much more straight-forward than the ones put up by the Freedom From Religion Foundation.

And it was losing business for nearby companies in Orange County, Florida:

The billboard was on Colonial Drive near the Old Cheney Highway. Although the popular Straub’s Seafood restaurant often advertises on it, this wasn’t their billboard. The sign was taken down after Channel 9 started asking questions.

The billboard came down around 4:00 Friday afternoon and nearby business owners are relieved. Straub’s restaurant can replace the sign with the night’s specials.

At first glance the sign looked like a children’s cartoon, but the message next to the fairy princess stirred emotions.

“When you condemn all religions and say they are a fairytale that is wrong,” said Rich Stormes, a nearby business owner.

The billboard went up a week before Easter and business at the restaurant went down.

“Easter Sunday is usually a busy good day,” said John Russel, an employee at Straub’s. “Easter Sunday business was down by two thirds.”

Since there’s no website or group name on the billboard, there’s no telling who put it up. And no group that I know of has claimed ownership of it.

The billboard rents for $1,400 a month. If an anti-religious group paid to rent it legitimately there is [no] telling how long it would have been up.

The company that owns the billboard says it didn’t approve the message, though. They say someone “put it up illegally in the middle of the night.” Which means no one would have paid for it.

In any case, the billboard has been taken down.

That’s unfortunate. It’s hard to pass judgment on either side until more details are available, but the billboard would be protected by free speech.

If someone paid for it, it should be allowed to stay up. Let it start some conversations. Let it make people upset. It’ll get some of them thinking about why the statement was made.

The original article from WFTV news is no longer up but back up and the full reprint is available at Black Sun Journal.

March 30, 2008 I Miss All the Good Stuff...
Browse Our Archives
What Are Your Thoughts?leave a comment