A church youth pastor dazzles us with his intelligence:

A couple of years ago, the youth director at Memorial Drive United Methodist Church in Houston was snacking in the church youth offices when he noticed an odd-shaped Cheeto. Upon further inspection, Steve Cragg determined he could see a familiar image of Jesus in the shape of the cheese curl.

One of the church youth named the item in question ‘Cheesus.’

‘Cheesus’ has remained on a bookcase in Cragg’s office since its discovery.

“I do not think that God makes Cheetos that look like Jesus or creates images of Himself on screen doors. I do know that God reveals Himself to us in a zillion different ways,” Cragg said. “Seeing the image of Christ in a Cheeto means that I was able to imagine it. God’s creation is full of signs and things that can and do remind us of Him.”

Cragg was moved to share a photo of ‘Cheesus’ with others in anticipation and honor of Easter.

So he knows God didn’t make a Cheeto that looked like Jesus… but he thinks it’s a sign, anyway.

Cragg almost had me thinking he knew it was a joke. But then he went ahead and said something idiotic.

It’s not a sign. It’s a Cheeto. And now it’s a Cheeto that’s a couple of years old. That’s nasty. Throw it out and remind me to avoid your office. 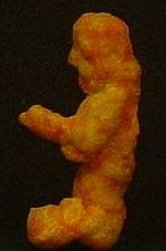 I’m trying but I don’t see a Jesus.

I am seeing a fetus, though: 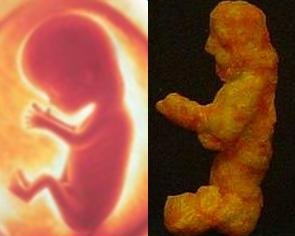 (via An Apostate’s Chapel)

March 24, 2008
National Simulcast For Church-State Separation This Wednesday
Next Post