Griffin, who angered the Religious Right with her hilarious Emmy Award acceptance speech, had a request from a couple of her fans to officiate their wedding ceremony.

With an ordained ministry certificate from the Universal Life Church and some paperwork from New York, Griffin was ready to preside over the wedding of fans Brian Anstey and Elka Shapiro. 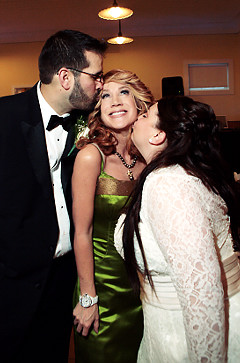 Neither are affiliated with any religion and both wanted to do something memorable and different.

[Griffin] joked that she had studied theology for months before being ordained online into the clergy of the Universal Life Church. “Actually, my assistant, Tiffany, applied for the certificate on my behalf, and it took about five minutes,” she admitted. “But I love that this couple just want to have fun. They’re my kind of people.”

For ten minutes, she had the crowd of 100 in hysterics as she joked about the couple’s sex life and made the bride read the menu for the reception:

“What did you get for the boring vegetarians and vegans?” Griffin wanted to know. “They’re such a pain at these things.”

For those who want to see video of the reception, it will be shown in June as part of Griffin’s show My Life on the D-List airing on Bravo.

And no, you can’t have her officiate your wedding, too. It was a one-time thing. (Plus, I can’t imagine Kathy Griffin being an ordained minister for more than a 10-minute stretch.)