A bill just passed through the Oklahoma House of Representatives that allows students to express their religious viewpoints without being penalized for it.

On the surface, House Bill 2211 (RTF file) sounds like a nod to religious freedom. A good thing.

However, this legislation actually has the potential to be disastrous. Says Dave McNeely of The Edmond Sun:

If a student’s religious beliefs were in conflict with scientific theory, and the student chose to express those beliefs rather than explain the theory in response to an exam question, the student’s incorrect response would be deemed satisfactory, according to this bill.

The school would be required to reward the student with a good grade, or be considered in violation of the law. Even simple, factual information such as the age of the earth (4.65 billion years) would be subject to the student’s belief, and if the student answered 6,000 years based on his or her religious belief, the school would have to credit it as correct. Science education becomes absurd under such a situation.

In other words, the following cartoon would be describing acceptable classroom work! 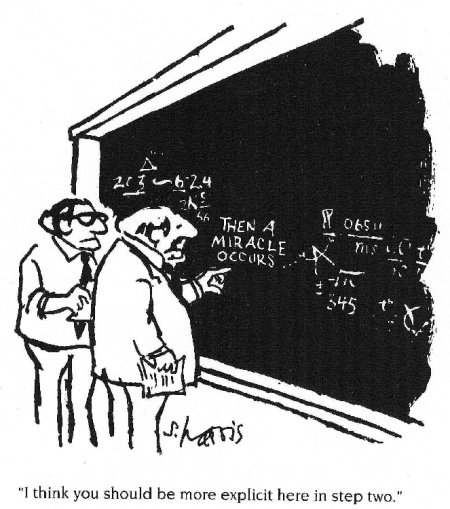 Also, school assemblies could take on who new meaning:

If a student chose to take his opportunity to speak to a group of students in a school-sanctioned assembly to tell them they must accept Jesus Christ as their personal savior or go to hell, then that student would have a right to do so, according to this bill. Especially, but not only if the student held a position of honor and authority (class officer, team captain), and was speaking in his or her official capacity, the school has clearly established religion in violation of both the U.S. and Oklahoma constitutions.

The same would be true if the student chose to tell the assembled students that they would not go to hell, that there is no hell and that those who promote belief in hell are liars. What if a Wican student chose to tell the assembled students that the only true God is Nature, or a member of a radical religious sect advocated assassination in order to preserve God’s will? According to this bill, those students would be free, in a forum supported by the school, to do so. Any or all of these scenarios would lead to lawsuits.

The state of Texas adopted a similar bill, and one school district has figured out how to avoid the lawsuits: they don’t let students speak at all during assemblies, or graduation, or at an athletic event. It’s a huge loss for talented, well-spoken students who will no longer get a chance to be heard by their peers and community.

I can imagine young Oklahomans sitting at home this weekend plotting out how they will take advantage of this horrible law. Will they find a way to get out of completing a project by finding some tie-in to their faith and how the project goes against their beliefs?

Science isn’t the only subject affected.

Will students be telling their math teachers that they believe pi = 3? (Even though many Christians have rationalized their way out of that one.)

Will they refuse to read a controversial English novel because of un-religious themes in the book? And if they do read it, will their essays all look like this?

The Oklahoma State Senate can put a stop to this nonsense… I’m not holding my breath that they’ll point out the flaws.