According to Benny Shanon, a professor of cognitive psychology at the Hebrew University of Jerusalem, Moses was on drugs when he heard the Ten Commandments:

“As far Moses on Mount Sinai is concerned, it was either a supernatural cosmic event, which I don’t believe, or a legend, which I don’t believe either, or finally, and this is very probable, an event that joined Moses and the people of Israel under the effect of narcotics,” Shanon told Israeli public radio on Tuesday.

Moses was probably also on drugs when he saw the “burning bush,” suggested Shanon, who said he himself has dabbled with such substances. 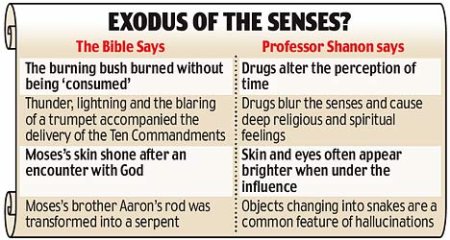 The whole notion makes me rethink all those people who “got stoned” in the Bible.

(Thanks to Lexi for the link!)

March 4, 2008
Church Ministers March in Mardi Gras Parade... (Not What You Think)
Next Post

March 4, 2008 The Distrusted Minority... Increasing in Number?
Browse Our Archives
What Are Your Thoughts?leave a comment