Can’t Escape the A Word

Doesn’t matter if you call yourself a Bright, Freethinker, Secular Humanist, Nontheist, Pastafarian, or None.

Everyone else is still going to call you “atheist.” 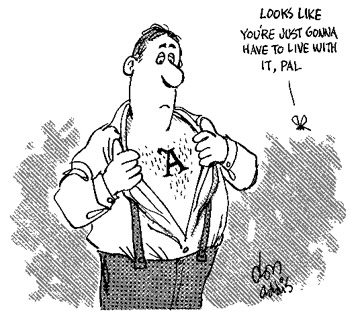 In an op-ed for Free Inquiry, Tom Flynn elaborates:

I’ve been doing media appearances as a secular humanist activist for fifteen years now. I perennially underwent this exchange:

REPORTER/HOST: Are you an atheist?

ME: I call myself a secular humanist. Secular humanists disbelieve in the supernatural and prefer to use reason, compassion, and the methods of science to build the good life in this life.

REPORTER/HOST: But you’re an atheist, aren’t you?

I couldn’t sidestep the “A” word. When I tried, it was all I’d get to talk about. Today, I handle this question differently:

REPORTER/HOST: Are you an atheist?

ME: Yes, but that’s only the beginning.

After that, my odds of actually getting to say something about secular humanism are pretty good…

That’s one good way to interject what you do believe.

But maybe that’s a futile effort. Is it even possible to change public perception of an entire group?

Sure it is. We all know another minority group that has done just that in similar circumstances:

Given the oppression of forty years ago, how stunning are the changes that gay/lesbian activism wrought. Yesterday’s “love that dares not speak its name” is now a sitcom staple. Gay marriage is a live issue. Few look twice if two guys kiss at a party. How did the gay/lesbian lobby do it? Not by avoiding the issues that most disturbed the mainstream, but by attacking them head-on. Much gay activism celebrated precisely the things straights found most disturbing, from gay eroticism to the word queer itself, repeatedly confronting mainstream sensibilities with flamboyant gay exemplars that “lived down” to straights’ most negative stereotypes.

If gay/lesbian activism could destigmatize the “Q” word and make Americans feel neutral about gay sexuality, imagine what similar activism by atheists—secular humanists included—could do to destigmatize the “A” word and help mainstream Americans accept their peers who live without invisible means of support.

Of course, this is easier said than done. But if more non-religious people were public about their atheism (in whatever form it took) and made a point of defending and protecting the word when others used it in a derogatory fashion, it’d be a start in changing the overall perception of atheists in America.