Who Needs an Ultrasound?

Why bother with medical technology to figure out the sex of your child when you can just consult a chart?

It is said that thousands of years ago the Chinese developed a calendar to predict a baby’s sex. It was supposedly discovered buried in a Royal tomb about 700 years ago.

Blue is for boy; pink is for girl. Is it correct?! 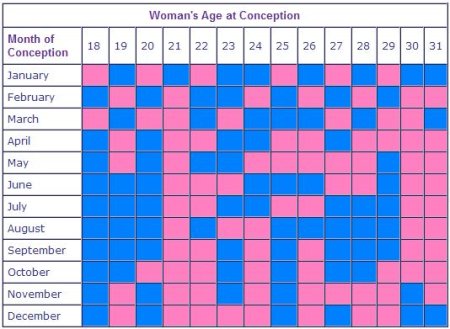 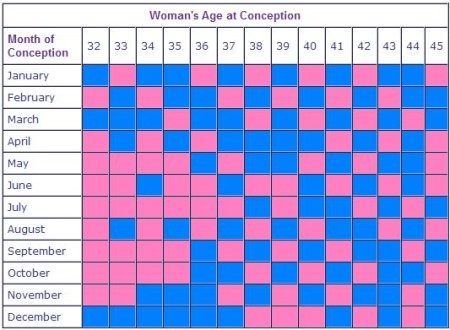 (Can someone recreate the code so that the blue colors create an image of a middle finger sticking up?)

Elyse at Skepchick brazenly says it doesn’t work (the heathen!):

For reference, according to this calendar- my son is a girl, I am a boy and I believe my husband might be a girl. So either we’re dealing with some grossly inaccurate predictions or I’m going to have an awkward conversation with my family in the morning.

An ancient Chinese trick? Not working? My world has been flipped.

The whole thing reminds me of a passage from Jeffrey Eugenides‘ Middlesex, where the narrator talks about his pre-born past (Desdemona is his grandmother; Chapter Eleven is his brother):

… Desdemona set the silkwood box on the kitchen table and opened the lid. She reached under the wedding crowns and the hair braids to come up with something Chapter Eleven hadn’t seen: a silver spoon. She tied a piece of string to the spoon’s handle. Then, stooping forward, she dangled the spoon over my mother’s swollen belly. And, by extension, over me.

Up until now, Desdemona had had a perfect record: twenty-three correct guesses. She’d known that Tessie was going to be Tessie. She’d predicted the sex of my brother and of all the babies of her friends at church. The only children whose genders she hadn’t divined were her own, because it was bad luck for a mother to plumb the mysteries of her own womb. Fearlessly, however, she plumbed my mother’s. After some initial hesitation, the spoon swung north to south, which meant that I was going to be a boy.

When the chances are (very nearly) 50% of being right, people will go to great lengths to cite anything that has correlated with “correct” results, whether it’s a chart, a spoon, or particular eating habits. It’s very easy to count the hits and ignore the misses. And when it fails, it’s always entertaining to hear the excuses as to why the method didn’t work.

February 26, 2008 If Atheists Took Over the World...
Browse Our Archives
What Are Your Thoughts?leave a comment