A few articles in the news today give current statistics about atheism in America and abroad.

First, some helpful graphics from The New York Times: 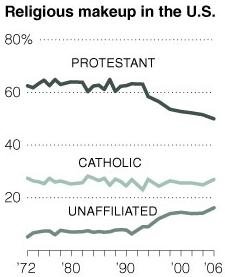 And this optimistic picture: 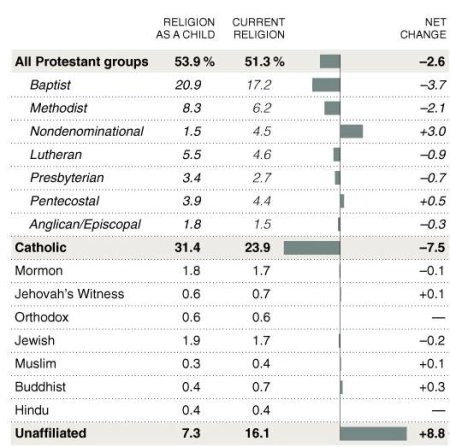 As the caption mentions, the unaffiliated make up the “fourth largest ‘religious group'” and many of them were raised as Protestants or Catholics.

This article, via the Associated Press, says that “nearly half of American adults [are] leaving the faith tradition of their upbringing to either switch allegiances or abandon religious affiliation altogether.”

More than one-quarter of American adults have left the faith of their childhood for another religion or no religion at all, the survey found. Factoring in moves from one stream or denomination of Protestantism to another, the number rises to 44 percent.

One in four adults ages 18 to 29 claim no affiliation with a religious institution.

The majority of the unaffiliated — 12 percent of the overall population — describe their religion as “nothing in particular,” and about half of those say faith is at least somewhat important to them. Atheists or agnostics account for 4 percent of the total population.

The religious demographic benefiting the most from this religious churn is those who claim no religious affiliation. People moving into that category outnumber those moving out of it by a three-to-one margin.

We’re gaining! Of course we’re not a “group” the way the religions are, but it means more people are getting sick of religion and/or becoming more rational when it comes to matters of the supernatural.

Also, you might wonder what the deal is with the 4% atheist number (That’s it?)… it’s a fairly accurate number. Far more people are not religious but they won’t use the terms “atheist” or “agnostic.” It’s also fair to assume there are plenty of people who use those terms to describe themselves but dare not say them in public (even in a survey). The fear factor keeps the number lower than it actually is.

Highest retention of childhood members? Hindus (They keep 84% of their lot)

Worst retention? Jehovah’s Witnesses (37% stay when they grow up).

Another article (by Jacqueline L. Salmon) discusses how atheists are finding strength in numbers:

A legion of the godless is rising up against the forces of religiosity in American society.

No one tells me anything.

A study released in June by the Barna Group, a religious polling firm, found that about 5 million adults in the United States call themselves atheists. The number rises to about 20 million — about one in every 11 Americans — if people who say they have no religious faith or are agnostic (they doubt the existence of a God or a supreme deity) are included.

They tend to be more educated, more affluent and more likely to be male and unmarried than those with active faith, according to the Barna study. Only 6 percent of people over 60 have no faith in God, and one in four adults ages 18 to 22 describe themselves as having no faith.

Of course, there are numbers that go above and below the ones mentioned.

A lot of atheist leaders are mentioned in the article:

“People who were ashamed to say there is no God now say, ‘Wow, there are others out there who think like me,'” said Margaret Downey, president of the Atheist Alliance International, whose membership has almost doubled in the past year to 5,200.

Representatives of atheist and humanist groups say the [New Atheist] books probably haven’t converted many religious people. But, said Lori Lipman Brown, a lobbyist for the Secular Coalition for America, which represents eight atheist or humanist organizations, the books “tremendously increase the visibility of nontheist rights.”

The budget of the Council for Secular Humanism has climbed 40 percent in the past two years, approaching $8 million last year.

The council opened a public-policy think tank in Washington last year to push leaders of both parties for policies based on the humanist principles of “science, reason and secularism” instead of religious faith, said Paul Kurtz, the council chairman.

A former Secular Student Alliance board member (and friend) is also mentioned:

Maggie Ardiente, 24, of Silver Spring, Md., faced the disapproval of her family and some friends because of her atheist beliefs.

“It’s hard for them even to comprehend,” she said.

There are some relatively small mistakes in the article (“Camp Quest” should be two words, not one; Congressman Pete Stark came out as a “nontheist,” not an “atheist”), but overall it’s a positive piece.

• 28 percent of atheists have post-graduate degrees or professional training.

• 15 percent of non-atheists have post-graduate degrees or professional training.

• 3 percent of atheists are “strong Republicans.”

• 16 percent of non-atheists are “strong Republicans.”

Another article (by Mary Jordan), juxtaposed with the previous one, focuses on atheism in Europe:

More than three out of four people in the world consider themselves religious, and those with no faith are a distinct minority. But especially in richer nations, and nowhere more than in Europe, growing numbers of people are saying they don’t believe there is a heaven or a hell or anything other than this life.

Christian fundamentalist groups who want to halt certain science research, reverse abortion and gay rights and teach creationism rather than evolution in schools are also angering people, according to Sanderson and others.

“There is a feeling that religion is being forced on an unwilling public, and now people are beginning to speak out against what they see as rising Islamic and Christian militancy,” [Terry Sanderson, president of the National Secular Society of Britain] said.

The full report that these articles are based off of can be found (and downloaded) at the website for the Pew Forum on Religion & Public Life.

Thinks are looking bright for Brights.

(Thanks to Joseph and Brooke for the links!)

February 25, 2008 Wealth and Religiosity
"Well trump doesn't know how it works either. No surprise here."
wolfendenpackleader “Prophetess”: I’ve Time-Traveled and the Media ..."
"I do.Any link address that ends in / is worthless. It won't post (I know. ..."
NOGODZ20 Christian Evangelist: Biden, Who’s “Not the ..."
"Neat, but not especially relevant in a conversation about Homo sapiens."
Holms Congresswoman QAnon Uses God to Justify ..."
"Sure thing, mate."
Holms Congresswoman QAnon Uses God to Justify ..."
Browse Our Archives
What Are Your Thoughts?leave a comment