The city of Hudsonville, Michigan has this Mission Statement: 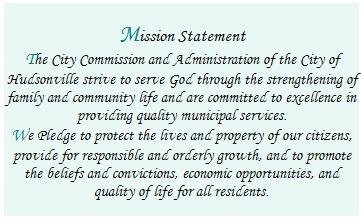 The Freedom From Religion Foundation requested that this reference be removed:

The presence of religion in the Mission Statement at a tax-supported city website establishes religion. A city should have no religious “beliefs.” That neutrality is the only way to ensure religious liberty for all citizens–which by definition includes the freedom to disbelieve and the freedom to dissent. We ask that the City immediately remedy this violation by removing references to “God” or religion from its Mission Statement.

In fact, The Grand Rapids Press published an editorial today endorsing the Mission Statement with the God inclusion and supporting the mayor’s decision:

The humble reference to serving God in the City of Hudsonville’s mission statement hardly poses a threat to religious freedom or the Constitution. The sentence simply reflects deeply held community values. Yet a small Wisconsin-based group called the Freedom from Religion Foundation has argued that the mission statement should be changed because it compromises religious neutrality and religious liberty. Leaders in Hudsonville, including Mayor Don VanDoeselaar, should resist those calls.

People opposed to any mention of the almighty in civic life can find plenty of reason to take offense — from school children pledging their allegiance to a nation “under God” to the wealth of references to the divine on public buildings and monuments in the nation’s capital.

The sheer ubiquity of those references is proof that God has not been banished from the public sphere, though he has been marginalized, sometimes too much so.

The Hudsonville mission statement reads, “The city commission and administration of the city of Hudsonville strive to serve God through the strengthening of family and community life and are committed to excellence in providing quality municipal services.”

That’s it. Nobody is being asked to subscribe to a certain set of beliefs or take part in a ritual not to their liking. Nobody is being forced to pray to a foreign deity, or to any deity at all, for that matter. Nobody’s being asked to agree. In fact, in a democracy, dissent is actively encouraged. In defining their mission, city leaders sought to make a statement about value and purpose that reflects their community.

FFRF promptly responded to this in an email to members:

Ironically, the editorial maintains: “Nobody is being asked to subscribe to a certain set of beliefs or take part in a ritual not to their liking.” “Nobody” is apparently a euphemism for Hudsonville’s nonbelieving population, who are indeed being turned into “nobodies”– second-class citizens–via this inappropriate and unnecessary espousal of governmental belief.

They are requesting that you “send a short, succinct e-mail dissenting from this editorial (signing name, full address and phone number if you want this to be considered for publication)” to Ed Golder, Editorial Page Editor.

If you can help the non-religious residents of Hudsonville, please send that email!

February 26, 2008 What Would You Ask God?
"No matter how absurd High School DxD gets, everyone knows that it's fiction. Well, everyone ..."
The Mighty Damuramu (pka TOW) Robert Jeffress: You’ll Work in Heaven ..."
"Mighty?"
Len MAGA Cultist Pastor: The COVID Relief ..."
"Trying to give Trump credit for something zero republicans support?"
creativerealms MAGA Cultist Pastor: The COVID Relief ..."
"He's gone but apparently not yet forgotten. :)"
NOGODZ20 Here Are Some Helpful Tips for ..."
Browse Our Archives
What Are Your Thoughts?leave a comment