I can’t tell if it’s Christian Fundamentalists or satire. It’s crazy enough to be both… 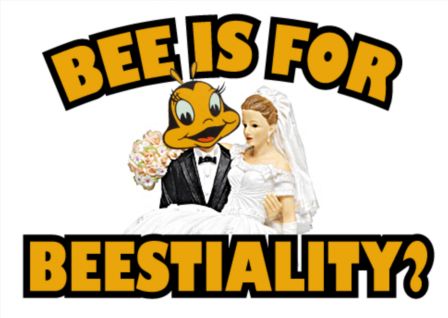 The animated muck machine is continuing to drag our nation’s children in the gutter through the promotion of all manner of sin. This time the agent of evil is a little Dreamworks film titled “Bee Movie” and the sin that it is propagating and promoting is nothing less than BEASTIALITY! The plot of this Dreamworks picture revolves around the romance between a HUMAN WOMAN and a lowly bee – AN INSECT! Never before has such depravity been dressed up as supposedly harmless family fare…

And there’s plenty more where that came from…

What do they say about Adult Swim?

What is this “Adult Swim” that comes on the Cartoon Network? To the good Christian it is clearly a major piece of the Sodomite Agenda dressed as harmless entertainment. It is mockery of our CHRISTIAN VALUES dressed up as a children’s cartoon all with the excuse by its perverted network that it is made with adults in mind, but any informed dissection of the name “Adult Swim” belies its true intentions.

In current cable television, the mere word adult has become nothing more than a euphemism for pornography –IE: “adult entertainment” or “adult situations.” The real question then becomes, why have the pornographers at Cartoon Network then chosen to combine the term “adult” with the word “swim?”

Don’t even get them started on Clifford the Big Red Dog.

February 19, 2008 For the Chicagoans: Come See an Atheist Comedian for Free
Browse Our Archives
What Are Your Thoughts?leave a comment