Susan Jacoby is the author of Freethinkers: A History of American Secularism.

She appeared on Bill Moyers Journal to discuss her new book: The Age of American Unreason.

It’s a really fascinating interview. Jacoby talks about how our society is ignorant and apathetic and there are drastic consequences to this. 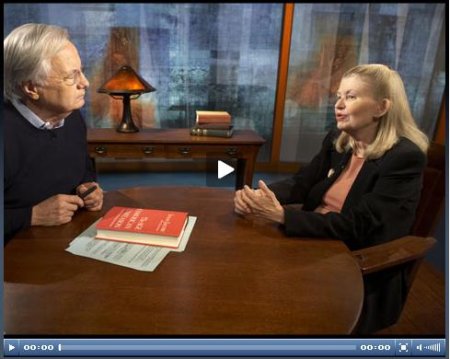 Here is just one telling excerpt (there are many, but this exchange stood out):

BILL MOYERS: What does it say to you, Susan, that half of American adults believe in ghosts? Now I take these from your book. One-third believe in astrology. Three quarters believe in angels. And four-fifths believe in miracles.

SUSAN JACOBY: I think even more important than the fact that large numbers of Americans believe in ghosts or angels, that is part of some religious beliefs. Is the flip side is of this is that over half of Americans don’t believe in evolution. And these things go together. Because what they do is they place science on a par almost with folk beliefs.

And I think– if I may inveigh against myself, ourselves, I think the American media in particular has a lot to do with it. Because one of the things that really has gotten dumber about our culture the media constantly talks about truth as if it– if it were always equidistant from two points. In other words, sometimes the truth is one-sided.

I mentioned this in THE AGE OF AMERICAN UNREASON that after the 9/11 terrorist attacks there was a huge cover story in TIME Magazine in 2002 about the rapture and end of the world scenarios. There wasn’t a singular secular person quoted in it. They discussed the rapture scenario from the book of Revelation as though it was a perfectly reasonable thing for people to believe. On the one hand, these people don’t believe it. On the other it’s exactly like saying– you know, “Two plus– two plus two, so-and-so says, ‘two plus two equals five.’ But, of course, mathematicians say that it really equals four.” The mathematicians are right. The people who say that two plus two equals five are wrong. The media blurs that constantly.

BILL MOYERS: You call that a kind of dumb objectivity.

BILL MOYERS: What does it say to you that nearly two-thirds of Americans want creationism based on the book of Genesis to be taught in our public schools along with evolution? What does that say to you?

SUSAN JACOBY: Well, it’s that evolution is just a theory, it’s just another opinion. Just as some people believe that the account of the six days of creation in Genesis is literally true, some people believe we’re descended form lower animals. In other words, it places belief on the same level as science subject to proof. I should say, however, that it may also mean that a lot of Americans aren’t exactly sure what creationism means. Because, in fact, the most recent Gallop poll shows that only 30 percent of Americans believe that every word of the Bible is literally true. In other words, many– most Americans believe the Bible is divinely inspired. But you can believe the Bible is divinely inspired and still believe in evolution.

SUSAN JACOBY: But you can’t believe that the Bible is literally true and still believe in evolution. There’s a wonderful book on religious literacy by Stephen Prothero — you know, which sites a poll that half of Americans can’t name Genesis as the first book of the Bible. Well, if you can’t– but this is part of the total dumbing down of our culture. The– one of those books apparently that the 50 percent of Americans aren’t reading is also the Bible or they would know that Genesis was the first book of the Bible. It’s sort of like, you know, “I don’t know what Genesis is, but I believe it.”

BILL MOYERS: Doesn’t this say– also say something beyond religious belief about the level of science education in our public schools?

I do agree with many cultural conservatives about this. I think that schools over the last 40 years– instead of adding things that– just adding things, for example. African-American history, women’s history, these are all great additions, and necessary. But what they’ve done in addition to adding things is they really have placed less emphasis on the overall culture– cultural things that everybody should know. People getting out of high school should know how many Supreme Court justices there are. Most Americans don’t…

Not coincidentally, the book was released on February 12th, Charles Darwin’s 199th birthday.

February 18, 2008 Charles Barkley Calls Out "Fake Christians"
Browse Our Archives
What Are Your Thoughts?leave a comment