Recently, an atheist billboard that was moved to a new location was replaced with one reading “The previous sign posted at this location does not reflect the values or morals of our company. Thank you.”

It hasn’t even been a week.

A new billboard is up in the same Chambersburg, Pennsylvania area. It also poses a rhetorical question… one that is loaded with bigotry: 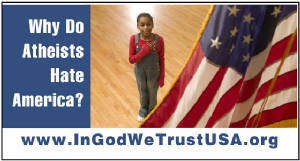 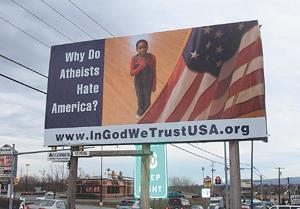 Jim Crumley of Trio Strategies, a public relations firm in Northern Virginia, said In God We Trust launched its campaign in response to the original billboard message that was sponsored by Freedom from Religion Foundation.

Bishop Council Nedd, chairman of IGWT’s board of directors, said in a press statement that FFRF has “embarked on a national campaign to denigrate religion and convince Americans that their country’s religious heritage is somehow wrong.”

Nedd said that FFRF’s “offensive billboards insult the millions and millions of Americans of varying faiths who believe that religion has been, and still is, a force for good.”

IGWT’s sign will rotate for the next six months in various places near Chambersburg. So far, only one of the signs is posted, but another one might be posted in another city, according to Nedd.

So, what’s the answer to the question? Why do atheists supposedly “hate America”?

… Nedd gave a quick reply: “That’s what we’re trying to figure out. We don’t know the answer.”

He said his group is not saying the atheists are anti-American. However, they appear to be, he said. Still, he said, “this is a free country and everyone is free to believe what he or she chooses.”

It gets better. Nedd is a goldmine for idiotic quotations.

FFRF is not simply a group of non-believers that wants to be left alone, he said: “They are a collection of organized, well funded zealots who are insulted by the mere existence of people who believe in the Almighty. The are determined to drive religion underground.”

On a list of ways one could describe atheists, “organized” and “well-funded” would never make the cut. Is FFRF zealous? Well, they’re passionate about what they do, but only in the sense that they want legal equality.

So what have we learned about Kegerreis Outdoor Advertising? They are offended by the mere questioning of religion. But they don’t mind a group of Christian fundamentalists making offensive insinuations about a minority group.

(Thanks to PA Nonbelievers for the link!)

February 9, 2008
Was Jesus Camp a Crappy Movie?
Next Post

February 10, 2008 Mike Huckabee Bears the Mark of the Devil
Browse Our Archives
What Are Your Thoughts?leave a comment