Atheist Billboard Gets a Response

I’ll change the relevant parts of the posting below to reflect that.

The Freedom From Religion Foundation had signed a contract with Kegerreis Outdoor Advertising LLC to put a billboard in the Chambersburg, Pennsylvania area, rotating about three different locations.

This is the billboard that was up:

Now, that billboard has been taken down moved. The original location now has a billboard that reads like this: 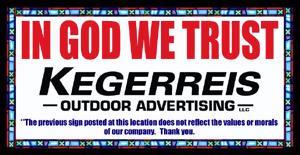 If you can’t read it, the fine print says “The previous sign posted at this location does not reflect the values or morals of our company. Thank you.”

I’m not sure what was so offensive about the FFRF’s bilboard. It merely posed a hypothetical.

And who would be so ignorant as to see a billboard promoting something and assume the billboard company was tacitly endorsing the product (or ripping down another)? (“That billboard is for Sprint?! The company must hate Verizon…”)

What was the reason for the takedown response?

Dusky A. Chilcote, senior account executive for Kegerreis Outdoor Advertising, Chambersburg, said the sign was posted Monday as the older sign, with the words, “Imagine No Religion,” was being removed.

“We received only a couple of negative calls about the (first sign),” Chilcote said on Monday. “We were concerned about the impact of how people see our company.”

Chilcote, a Christian, said she was personally hurt by the deception of the sponsor, who allegedly led her to believe the sign was presented by a local church.

She said in December that the sponsor of the billboard had contacted her and said “their desire was that people would have the freedom to walk into any church they choose.”

I asked FFRF’s co-presidents Dan Barker and Annie Laurie Gaylor if that statement was accurate. I am awaiting a response.

I have no idea how or why she could make an assumption that our group was a church! How could we, with our name? I have to assume she is either making things up because she felt she had to cover herself from criticism, or she was so religious she couldn’t believe a group like ours existed. One can only speculate.

February 9, 2008
What Are You Doing for Darwin Day?
Next Post