How Bookstores Deal with Atheist Lit

Paul Constant in The Stranger rants about the seemingly random ways certain bookstore chains categorize atheist books (that is, if they categorize them at all):

If you should happen to be in the U-Village Barnes & Noble and you should happen to ask to see the atheism/agnosticism section, well, you should prepare for disappointment. A number of atheist books were released last year—God Is Not Great, The God Delusion, The Portable Atheist—and a good many of them became best sellers. Barnes & Noble stocks most of these books in the philosophy section (next to such faced-out wonders as Pink Floyd and Philosophy and Embryo: A Defense of Human Life). And the philosophy section is dwarfed by the mammoth Christian Inspiration section and the Religious (read: Christian) Fiction section.

This is the standard for Barnes & Nobles across the country. I sent an e-mail to Mary Ellen Keating, B&N’s spokesperson, asking why books for nonbelievers were so poorly represented. She replied, “We are planning to introduce an atheism section as part of the philosophy subject later this year.” Keating declined to get more specific on a date. Barnes & Noble is far from the only bookstore in town to not address atheism as a subject. Elliott Bay Book Company doesn’t have an atheism section, choosing to shelve the atheism books in general religion instead, and the University Book Store’s unmarked atheism/agnosticism section has exactly 12 titles. Classics like Bertrand Russell’s Why I Am Not a Christian are shelved elsewhere. These independent bookstores are losing out on the chance to one-up one of their chain-store competitors: Borders Books and Music has the best atheism/agnosticism section in Seattle, and it’s had the section for years. Seattle Metropolitan‘s stance on the existence of God remains unknown at press time.

You have to wonder why other bookstores aren’t jumping on Border’s bandwagon.

It’s always a pleasant feeling walking into any Borders and seeing something like this: 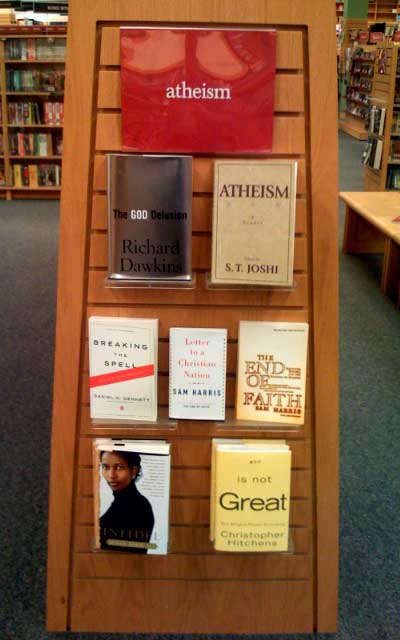