Teen Kicked Out of Class for Not Standing During Pledge February 6, 2008 Guest Contributor

Teen Kicked Out of Class for Not Standing During Pledge

Devon Smith (below), a sophomore at Spring Valley High School in Las Vegas, didn’t recite or stand for the Pledge of Allegiance on Monday morning. 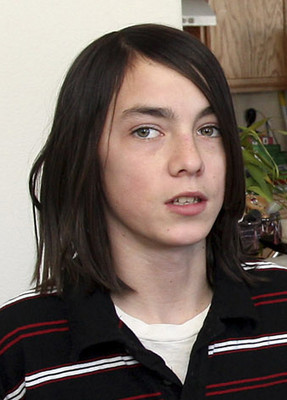 This is perfectly acceptable. A lot of atheists don’t say/stand for the Pledge because of its reference to America being a nation “under God.”

Devon’s teacher, Susan Rheinwald, didn’t see it that way. She kicked him out of class.

Here are some excerpts from the article by Paul Harasim:

“I wasn’t being disruptive,” [Smith] said Monday afternoon while sitting with his mother on the couch in their Spring Valley home. “I don’t believe we are ‘one nation under God’ as the Pledge says. I don’t believe in God. So I was just sitting there. That is my right.”

“After I told her (Rheinwald) that I don’t recite the pledge, she said I didn’t have to say it but that I had to stand while others did,” Smith said. “When I told her ‘I don’t do that,’ she told me to get my stuff and go to the dean’s office.”

Though Smith was told to go to the dean’s office by Rheinwald, he phoned his mother, Donna Pearson, who told him to come home.

Like her son, Pearson does not believe in God. She is a member of the Wiccan faith, though her son says he is not.

After he has declined to recite the Pledge of Allegiance in other classrooms, some irritated teachers suggest that “they wish I had to go fight in Iraq,” Smith said.

The principal is saying there was more to it than simply refusal to participate, though he’s not elaborating:

Though Rheinwald was unavailable for comment, Spring Valley Principal Bob Gerye said Smith was not booted from class because he wouldn’t recite the pledge. “A student has that constitutional right,” Gerye said.

“There’s more to it,” he said, declining to say what prompted the discipline. He did not say Smith was disruptive.

Gerye said he did not know whether Rheinwald told Smith to leave because he refused to stand during the pledge.

Smith had been in trouble in the past for disciplinary reasons (he was expelled from his previous school). He states that he’s learned his lesson and none of those disciplinary issues were cited as a reason he was kicked out of class.

You can get more information on Smith’s story here.

Karen at Rant & Reason says that there’s a larger problem at hand, though:

… it seems that teachers in Clark County, where Smith attends school, are trained to require students to stand for the pledge. Debbie Tomasetti, a coordinator for new teacher induction, said that she interprets school district regulations — which state that students with conscientious objections “shall maintain a respectful attitude through the ceremony” — to mean that students must stand for the pledge.

This article, also by Harasim, confirms that:

Debbie Tomasetti, the coordinator, said Tuesday that her interpretation of school district regulations requires students to stand respectfully during the Pledge of Allegiance, even though they may have conscientious objections to the observance.

New teachers are told, she said, that students, regardless of their beliefs, are supposed to “stand and show their respect” during the pledge.

“They are misinforming new teachers,” said Peck. “It’s no wonder we have so many complaints and have to intervene with so many students.”

Bill Hoffman, the district’s general counsel, said “there may be some confusion” in the district about a student’s constitutional rights.

“There is no obligation to stand,” he said. “We’re going to have to improve and reinvigorate our training.”

Maybe the school officials can learn a lesson from Devon. He obviously knows the law better than they do.