The First Humanist Wedding in Poland 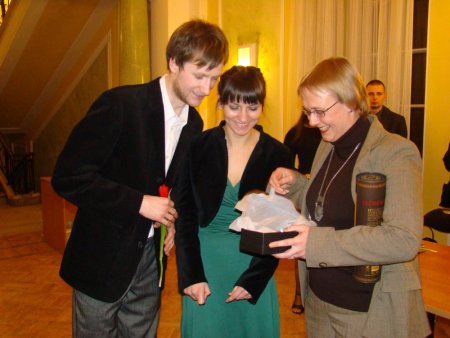 The cute couple above (and to the left) were wed in Poland’s first ever Humanist wedding ceremony.

Jane Bechtel is the Scottish humanist celebrant who conducted it.

Held in Warsaw on Sunday the 9th of December, as part of the 100th anniversary conference of the Polish Freethinkers Association, the wedding generated a lot of interest and publicity across the Polish Media.

Humanist Ceremonies are very rare in Poland as 90% of the population is Catholic, however interest is increasing among younger people, and it has been suggested that many of those who have left the country to work in Western Europe find rational and humanist approaches appealing.

You can see more pictures from the celebration here.

By the way, it looks like Humanist wedding ceremonies are growing in popularity in other places as well:

For those who got married in a church, does this make you want to run out and redo that wedding ceremony of yours…?