Jesus is Better than Santa 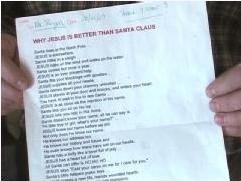 This is a teacher who had the Ten Commandments posted in the classroom. Religious books were on the classroom bookshelves. The teacher’s school-funded website had links to Christian organizations (one link referred students to “evidence for creation”).

The questionable material has since been taken down. Principal Paul Simmons said “he’s observed Roger’s class several times and never heard him speak about religious material.”

He also dismisses the notion that this handout was intended for the whole class:

Even if that’s true, the Ten Commandments and Christian books in the classroom are still disturbing enough… not to mention the notion that he is an educator who doesn’t accept evolution.

Mel Downs is the father of a seventh-grader at the school who contacted the American Civil Liberties Union. Kudos to him.

“It isn’t about my religion or me being biased in some way,” Downs said. “It’s about the separation of church and state that is supposed to exist in my daughter’s classroom.”

If Mr. Rogers (ha!) apologizes, takes down the material, and stops sharing his personal beliefs with the students during class time, I don’t see any need to take this any further. No need to fire him or call for a suspension. Hopefully, this teacher will learn his lesson, unlike David Paszkiewicz, who tried denying he did anything wrong.

(Thanks to Kate for the link!)

January 28, 2008 Positive Atheist in Philadelphia
Browse Our Archives
What Are Your Thoughts?leave a comment