Virgil Griffith, a student at Caltech, had a cool idea for an experiment.

Using Facebook, look at all the students who attend a particular university. Figure out the top ten most popular books that are read by those students.

Then, find out the average SAT scores of students admitted to that college (which is usually available on the schools’ websites).

Put that data together and you have a rough estimate of which books correlate with “more intelligent” students.

(In the image below, which you can click to see close up, the various colors represent different genres, the vertical axis means nothing, and the horizontal length of the boxes represent the average SAT score a certain book corresponds to along with the margin of error for that score) 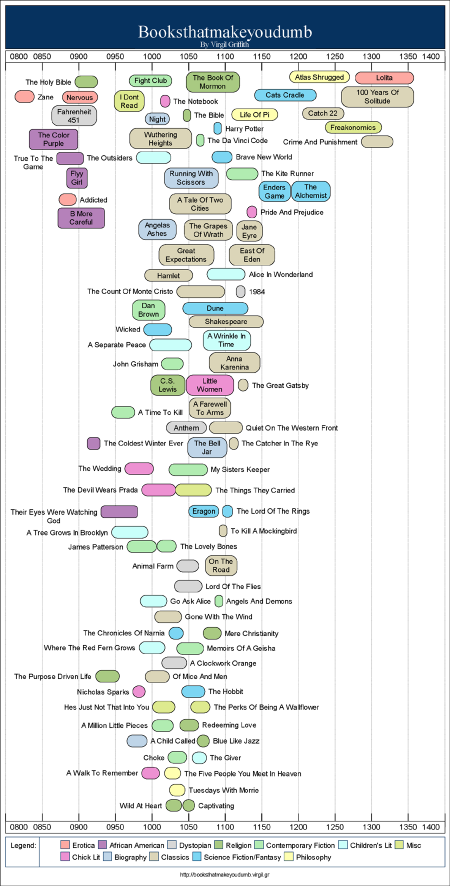 I was drawn to the religious books (obviously). A lot of interesting things stand out:

The Bible ranks higher than The Holy Bible. (These count as two separate books on Facebook.)

“I don’t read” ranks higher than The Holy Bible.

Pastor Rick Warren‘s The Purpose Driven Life ranks relatively low on the overall list while C.S. Lewis‘ Mere Christianity ranks relatively high among religious books (though the latter is almost smack dab in the middle of the entire spectrum).

Griffith also points out a couple other things:

At least among college students, Harry Potter is, like the Beatles, indeed bigger than Jesus.

Not a single school above the mean (1071) has “The Holy Bible” on their list.

Regarding that last one, it should be pointed out that students of the top schools do have “The Bible” on their list.

After all this, the big question comes up:

Obviously, correlation does not equal causation. That is, this graph doesn’t answer the question in any meaningful way.

And before you jump to any conclusions, consider which books on the list you enjoy.