Where Are the Jews? 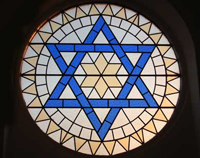 Many Christians visit this atheist blog. Some come regularly to read and comment, some for a brief time to learn about atheists or to challenge or clarify their own beliefs, a few to preach, and a very few to snipe or condemn. In the last 15 months I can remember Muslims commenting here three times. Forgive me if I’ve missed them but I can’t remember any practicing or observant Jewish people commenting here at all. They are a small minority in English speaking countries and they are not inclined to evangelize but still their complete absence from our discussions here is puzzling to me.

Living in Los Angeles all my life I have had many Jewish friends but only one with a sufficient closeness to discuss such personal things as religious beliefs and he turned out to be an atheist. So other than attending a few weddings, a Bar Mitzvah and a Passover Seder I know very little about their faith, only that there are five basic forms in the U.S: Orthodox, Conservative and Reform being the largest groups, and Reconstructionist and Humanistic being newer, smaller groups.

More to the point, I know nothing about how they feel about atheists and atheism.

So it would be interesting to learn from those of you who have firsthand knowledge about the following questions. I expect that the answers may vary depending on the form of Judaism.

• How do Jews feel about, react, respond, deal with atheists in their families, in their community or at work?

• Do Jews have a different feeling or attitude toward atheism in general than Christians or Muslims have?

• Do you have any ideas why we don’t hear from them on this site?

January 24, 2008 100% Un-deluded
Browse Our Archives
What Are Your Thoughts?leave a comment