Imagine the pleasant surprise I had today when I opened up the Chicago Tribune and saw the following teaser on the upper left hand side of the paper (click to enlarge):

So I open up the Tempo (a.k.a. features) section and see Dawn Sherman‘s picture taking up nearly the entire page! 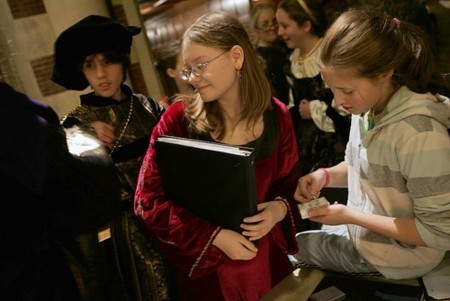 Dawn is, of course, the 14-year-old activist who has fought against the mandatory moment of silence law in Illinois and “got God banned from Homecoming.”

The article, by Nara Schoenberg, is extremely positive in its portrayal of Dawn as well as her father, Rob Sherman.

Dawn was doing schoolwork on the Internet in October when she came upon the new law, which calls for a brief but mandatory period of silence at the start of the school day. She went to her dad, a former national spokesman for American Atheists, and he told her he already knew about the law and was going to a school board meeting to protest.

She said she would go along.

“My rights were being affected because, first of all, the teacher is being made to stop teaching, and I’m being [made] an audience to something that is heavily suggestive in the direction of prayer because of the title of the act. It’s called the student prayer and silent reflection act,” she says.

What has the reaction to her activism been like?

There are some lighter moments, too:

“I am not a lot like my dad,” she says, smiling at him. “He likes to go after things without a second thought. I like to think things through occasionally. He and I disagree on a lot of things.”

One way they have diverged: Dawn sings religious music in the Grace Episcopal choir. She loves the music, she says, and the words don’t bother her because she doesn’t attach much meaning to them. Her father says that singing in a church wouldn’t be his choice, but he doesn’t stand in his daughter’s way.

Then there’s the matter of hairstyles. Dawn says her father wants her to part her hair on the side, just like him.

“I don’t want to be Robbie Jr. I want to be my own person!” Dawn says, laughing but not giving an inch. “That’s why I’ve never parted my hair over the eye.”

Her father smiles proudly. “She’s almost exactly like me,” he says.

Amazingly, the number of comments on the article are well over 700 as I write this. (By comparison, another article about Hillary Clinton has just over 100 comments.) They run the gamut from support to condemnation. (You can tell which ones were written by fanatical Christians by the stuck CAPS LOCK key in their remarks.)

Kudos to Dawn for doing everything she does.

Hopefully, other young atheists will follow in her footsteps.