The Center for Inquiry‘s representative to the United Nations, Austin Dacey, has a book coming out in mid-March called Secular Conscience: Why Belief Belongs in Public Life (Prometheus Books, 2008). 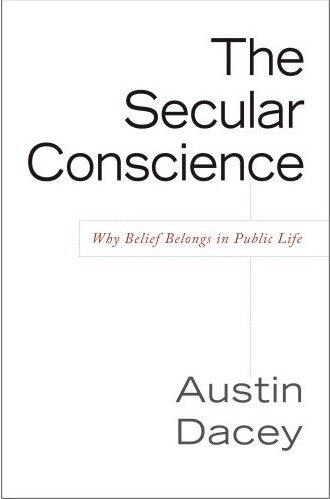 Don’t let the title fool you.

A number of prominent atheists have been raving about this book already:

“The Secular Conscience reveals how simplistic notions of privacy, tolerance, and freedom keep dangerous ideas sheltered from public debate. This is an extraordinarily useful and lucid book.” — Sam Harris

“With wit and a philosopher’s insight, Dacey explains exactly why secular morality, grounded in an ethical approach that relies on reason rather than supernatural faith, is sorely needed in the public square.” — Susan Jacoby

“With intellectual vigor and moral confidence, Austin Dacey demonstrates the self-defeating fallacies of efforts to privatize individual conscience and belief. Secularists and non-theists should heed his call to join public debates about fundamental ethical values, instead of questioning the impulse to conduct them.” — Wendy Kaminer

Publishers Weekly, which has been accused by some of being biased against books written by atheists, now adds one more enthusiastic review to the pile (emphases mine):

In a dazzling display of erudition, this book presents a cogent argument for secular liberalism. Dacey, a philosopher who teaches at Polytechnic University and the State University of New York at Buffalo, claims that values and ethics—defining what is right and wrong, good and bad—are not the sole domain of theologians. To contribute to our understanding of enlightened secularism, he cites like-minded thinkers such as Thomas Hobbes, John Dewey, Adam Smith, John Rawls, Immanuel Kant, John Stuart Mill, Plato, John Locke and Baruch Spinoza, among others. Dacey’s presentation is especially timely in view of the emphasis by some current presidential candidates on their religious identity. Not since 1960 when John F. Kennedy, as a Roman Catholic, argued for church-state separation has the issue of secularism versus religion been so prominent in a national election. Dacey’s analysis helps to put this question into the larger perspective of liberty and conscience. Dacey advocates for democracy over authoritarianism, not hesitating to challenge theocratic Islam, for example, as a “new totalitarianism.” He calls on secular liberals to stand up for “reason and science, the separation of religion and state, freedom of belief, personal autonomy, equality, toleration, and self-criticism.” This is a thoughtful, well-reasoned argument for progressive secularism.

The book is currently scheduled for release on March 18th.

(P.S. That book cover. Really? Couldn’t come up with anything better? It falls in line with the other disappointing atheist-book covers…)

January 2, 2008
Interview with Becky Garrison, author of The New Atheist Crusaders and Their Unholy Grail
Next Post

January 2, 2008 Atheism and Custody Cases
Browse Our Archives
What Are Your Thoughts?leave a comment