There’s so much shameless propaganda against atheists, I tell you!

It’s been going on for decades. 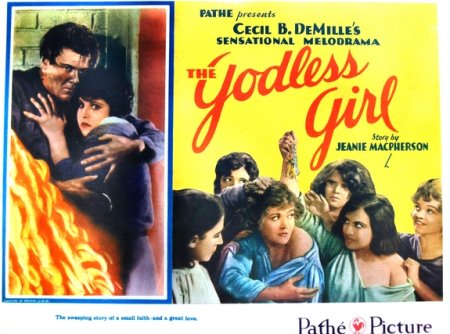 Just look at this excerpt from Cecil B. DeMille‘s last silent film The Godless Girl:

Apparently, our atheist heroine (actress Lina Basquette) falls in love with the head of a Christian youth group. (We don’t get to see that part of the movie in the clip.)

Here’s some of the backstory behind the movie:

The film’s high school “Godless Society” was partly inspired by a controversy that broke out at Hollywood High School in 1927 when American Association for the Advancement of Atheism flyers were found in student lockers. The ringleader of the Godless Society, played by Lina Basquette, was loosely based on Queen Silver, a precocious agitator from Los Angeles, who at the age of 12 wrote a pamphlet on evolution that came to national attention during the “Scopes Monkey Trial.”

More details can be found at IMDB.

It appears that evolution was accepted by at least some intelligent people back then.

What’s with the swearing in on the head of a monkey…? I mean, I thought that was something only my old campus group did!

I’m offended that the new atheist inductee’s name is Bozo. That attack’s not even subtle…

How did atheist groups back then get so many women to come to their meetings?! That’s impressive. Clearly, we’ve made backwards progress in that area since the movie came out.

(Thanks to Tom for the link!)

December 22, 2007Chicago Sun-Times Interview
Browse Our Archives
What Are Your Thoughts?leave a comment