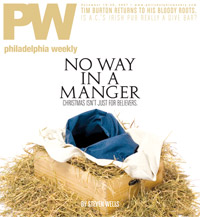 A wonderful cover story appears in the recent Philadelphia Weekly about local atheists:

We will meet a large-breasted exotic dancer and atheist intellectual who loves watching the Christians she debates try to maintain eye contact. And a little girl who, while the adults upstairs are holding a seance, bangs on the basement ceiling with a broom and flashes the lights on and off by removing and replacing the fuses. We’ll meet right-wing libertarians and left-wing liberals, woolly agnostics and hardcore “nontheists,” students, professors of philosophy, moms and dads and YouTubing, blasphemous T-shirt-wearing punk rock troublemakers. The only things they’ve all got in common are: a) they don’t believe in God (or Santa or the Flying Spaghetti Monster) and b) they’re your neighbors.

Quick. Guess who they are!

Downey’s the go-to atheist when Fox News, sick of seeing intellectually challenged God-botherers like Sean Hannity and Bill O’Reilly get chewed to shreds by the combative cigarette- and whiskey-breathed Brit Christopher Hitchens (author of 2007’s atheist bestseller God Is Not Great), decide they need a well-spoken American lady to represent the forces of godless evil instead.

After the erection of the West Chester tree, Fox paired Downey with an eager young priest. Glammed up to the nines, the politely smiling Downey ran rings round the boy.

“I regularly lecture students at Penn,” she says. “One student told me, ‘When we heard you were an atheist, I thought you were going to look like a gypsy or something—and then in walks Mary Tyler Moore.’”

Over the years Downey has thrown herself into various causes—antismoking, antiracism, feminism. And then in 1990 the Boy Scouts of Pennsylvania made a big mistake. They rejected Downey’s son Matt—a scout in good standing for seven years in New Jersey—for being an atheist.

The Scouts didn’t know it at the time, but they’d just pissed off the atheist equivalent of a mama grizzly bear.

The Rational Response Squad‘s Kelly O’Connor is also mentioned. They seem to be infatuated with her body. (They’re not the only ones.)

By my count, her name is mentioned in the article just as many times as her breasts:

She has short red hair, elfin features, a tight low-cut top and large breasts. This is Kelly O’Connor. She works as a dancer when she’s not bashing out passionate and witty articles about the pope for the hugely popular website of Philadelphia’s notorious Rational Response Squad.

Good article. The fact that it’s a cover story is even better.

The Philadelphia atheists do teach us all an important lesson in how important and powerful it is to be vocal about what you (don’t) believe in. People listen to you; some may even join you.

(via Free Mind Joe and Ben)

December 19, 2007 Altar Boy Defense Tips
Browse Our Archives
What Are Your Thoughts?leave a comment