Catholic and Atheist on a Date December 16, 2007 Guest Contributor

Catholic and Atheist on a Date

The date was set up by the New York Post. 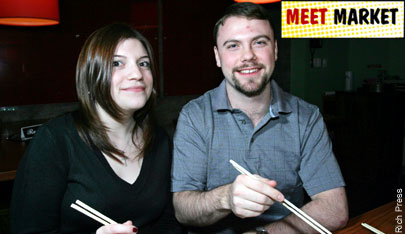 The guy, Dan, is an atheist.

The girl, Kristen, is a Catholic.

This should end well.

As we were talking, Dan asked about the cross around my neck. I knew wearing a cross on a first date was going to raise an eyebrow, but I quickly explained I’m not a religious freak and it was gift from my mother. He said it was a beautiful cross, which made me wonder if he was religious at all. Turns out, he’s an atheist.

What did Dan have to say?

After being seated, I noticed she had a cross around her neck and mentioned it. She already seemed really nervous about the blind-date situation, but when she started defending herself and insisting that she wasn’t really religious, it seemed like she wasn’t being all that genuine. I mean, if you’re wearing a cross, there must be something to it.

It’s probably not going to work out. He only gave her “2 hearts” to her giving him 3 (out of 5 possible hearts).

Interesting question, though: If you’re going to wear a cross, shouldn’t you be proud of it and be able to say so, instead of first admitting you’re “not a religious freak”?

December 16, 2007
What If We Elected an Atheist President?
Next Post

December 16, 2007 Humanist Symposium #12
Browse Our Archives
What Are Your Thoughts?leave a comment