Trials of a Softhearted Scrooge 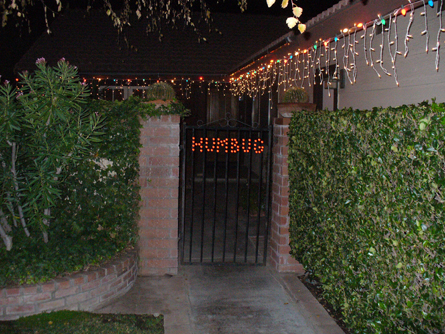 Christmas time is a pain in the neck for me. But this year I’m trying to be a nice atheist.

Today I went to the hardware store for a light bulb and some batteries. The place had transformed since I’d been in a few days ago, from hardware store to mondo-bizarro-psychedelic-drug-trip-surreal-fantasy-forest. On my left there was a nine foot tall purple and white inflated penguin with snow cap and scarf, as if a monstrous Chilly Willy had been considered for the climax of “Ghost Busters” before they settled on the Stay Puft Marshmallow Man. On the right was an army of plastic snowman families dressed in Dickensian clothes huddled together as if for warmth, singing carols. In front of me was a larger than life statue of Santa Claus wearing shades and straddling a Harley Davidson motorcycle with recorded Christmasy versions of “Born to Be Wild” and “On the Road Again” coming from a speaker in his chest. Beyond that was literally a forest of ready made artificial pine trees decked out with every toy-snowflake-bulb-trumpet-ribbon-angel-elf-snowman-reindeer-tin soldier-candycane-package-harp-star-sleigh-icecicle-teddybear-drum-locomotive-doll-bell-resembling, but still unidentifiable object that could ever come out of the scrambled minds of a thousand psychotic Christmas product designers.

If I was struck sharply on the head, given large doses of PCP, methamphetamine and LSD and suddenly transported into the center of an extraterrestrial civilization all in the same instant the experience would be similar but less disorienting than walking into that former hardware store.

The place was crowded and people were almost frantic in their searching and buying. As I stumbled through the labyrinth of lunacy to where I thought the batteries and light bulbs used to be, a woman nearby was looking at a box of exterior Christmas lights and saying, “Look Honey, these change different colors and flash at different speeds. Let’s get these.” My befuddled mind flashed back to 1962 “light shows” with colored lights pulsing to the rhythm of rock music.

I found my merchandise and prepared to escape with what shreds of sanity were still mine when I saw a display of several shelves of plastic nativity scenes with the Holy Family, animals and manger. On the base of each one was a red button labeled, “Try me!” I pressed the button and a recorded voice started saying “When Jesus was born in Bethlehem…blah blah,” followed by some of the more religious Christmas carols. There were eighteen Nativity Scenes on display, so of course I pushed every button. “When Jesus was born…” “When Jesus was…” “When Jesus…” The cacophony of eighteen of them all going at once in staggered sequence was impressive and it continued for several minutes as I left the store, somehow feeling better.

When I got home my lovely, wonderful, deserving-of-anything-I-can-give-her wife said, “Richard, we’ve got to get the Christmas cards sent out.”
Now I’m trying to be a nice atheist this year so I said, “Ohhhhh, okaaaay,” muttering “humbug” under my breath. So I pulled this big carton out from the garage that has 37 pounds of old leftover Christmas cards. We buy them by the boxful to try to save some money and we end up with leftovers. There are pretty ones and funny ones, but no really religious ones. Some say, “Merry Christmas,” or variants of that, some say, “Happy Holidays,” or variants of that, and a few odds and ends mention Hanukkah. The reason we have so many leftovers is because our family and friends fall into so many categories: devout Christians, not-too-heavy Christians, observant Jews, unobservant Jews, a few Buddhists and of course other nice atheists like me.

So we had to carefully sort out who gets what kind of card. Some of the devout Christians are getting touchy lately about sentiments that don’t mention the word “Christmas.” They’re not happy with “Happy Holidays.” The not-too-heavy Christians are fine with anything except of course the Hanukkah ones. Our observant Jewish friends don’t complain, but we don’t really want to send them one that mentions Christmas. Our unobservant Jewish friends don’t seem to mind either way, but still it would be better that they get a Hanukkah or at least a “Happy Holidays” variant. The Buddhists welcome any good wishes even though they know it’s all an illusion. Finally the nice atheists (like me) don’t care much one way or the other but if we send them either kind of card they might think I’m starting to get religion and I wouldn’t want that. But then we don’t want them to get nothing….

Then there was the problem of whether or not we sent a person one of these cards before. We don’t want to send anybody the same card twice. Most of them are pretty smart and would remember a duplicate even if it was several years ago. Some of these cards are getting really old.

All this took a lot of time and I was tempted to chuck the whole carton into the fireplace and print up my own cards that say:

“Wishing that you don’t get seriously injured while fighting in the tiger shark feeding frenzy at the mall trying to find thoughtful and valuable gifts for everybody else who’s out getting stupid cheap stuff for you that you won’t like but will have to pretend that you do and trying to avoid going broke in the whole nonsensical process, in observance of whatever the heck holiday you celebrate, if any.”

But I didn’t do that, because I’m being a nice atheist.

Later my lovely, wonderful, deserving-of etc. wife said, “Richard, could you put up the Christmas lights and set up the tree while I’m at the market? I know it’s a pain in the neck for you, but it makes me happy.”
“Ohhhhh, okaaaay.” I said, muttering “humbug” under my breath again. She has fond childhood memories attached to all this paraphernalia so hey, if it makes her happy, what else is important? So I dragged out several boxes of Christmas geegaws for inside and out without complaining the way I usually do. And this year, just to be a nice atheist, I removed the sign from the front door wreath that says,

This year I’m going to be a nice atheist, dammit. If the neighbors mistakenly assume I’m a Christian, so what? Screw ‘em. (muttering “humbug” under my breath)

Risking life and limb teetering on a ladder I put up the exterior lights around the eves of the house, a string of colored ones and a band of white ones supposedly resembling icicles. That’s weird too. It hasn’t snowed here since 1951, and no icicles since the Pleistocene. Only here in Lotus Land would people use lights to imitate icicles. My neighbors compete by the thousands of kilowatts to express who is the most frikking joyful, making the neighborhood look like an electrified Currier and Ives lithograph on steroids. I’ve heard that icicles can kill people back east. I hate snow. I almost died in it. Humbug.

Oh for the days of my youth when front yard Christmas decorations were sensible like the tumbleweeds painted white and stacked up and decorated to look like snowmen. Decorations with deep meaning like the two Santa feet sticking out of the chimney or the all-aluminum Christmas tree, dazzling in the color-changing floodlights on the dichondra, or the glowing plastic camels carrying guys looking like bin Laden marching toward a glowing plastic manger, overseen by a much larger glowing plastic Rudolph. Those decorations were tasteful and meaningful. What has become of it all? (sigh) Humbug.