It’s kind of like the Blue Collar Comedy Tour, the Axis of Evil Comedy Tour, and The Original Kings of Comedy tour…

Except this group has some diversity.

What a novel approach…

A Muslim, a Hindu, a Christian, a Jew and an atheist walk into a comedy club. It’s not the beginning of a joke, but it is the start of an evening of holy – or unholy – humor. 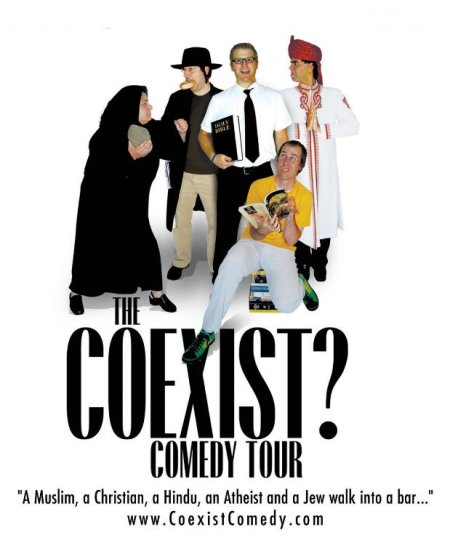 (Atheist) Keith Lowell Jensen began the group along with the help of his (Hindu) friend Tapan Trivedi:

Jensen said, “I was hanging out backstage at a comedy show one night, chatting with my buddy Tapan, and we were laughing that here we were, an atheist and a Hindu, about to go onstage before a roomful of Christians and tell jokes.

“It hit us what a cool thing that actually was.”

So far, they’ve been a hit, selling out multiple shows in California.

As the atheist, Jensen said, he enjoys the opportunity of “destroying their sacred cows – figuratively, but sometimes literally” – although the real purpose is not to ridicule another’s religion so much as to try to understand it.

“It’s kind of an interfaith thing,” Jensen said. “You don’t see a lot of atheists being invited to interfaith meetings, and it’s true that we’re not a faith, but we do have something to contribute to the discussion.”

I also really like the atheist knock-knock joke at the 2:50 mark of this clip 🙂

(You can check out clips from everyone in the group here.)

If you’re in the Sacramento or San Francisco area, you can get tickets to upcoming shows! Or just join San Francisco Atheists and watch the group when they perform at the upcoming Solstice Party 🙂

November 26, 2007 Pets More Comforting Than Priests
Browse Our Archives
What Are Your Thoughts?leave a comment