An estimated 14% of Americans profess to have no religion, and among 18-to-25-year-olds, the proportion rises to 20%, according to the Institute for Humanist Studies. The lives of these young people would be much easier, adult nonbelievers say, if they learned at an early age how to respond to the God-fearing majority in the U.S.

It would definitely help. So many young atheists live in fear of telling anyone, even close friends, what they believe.

A good friend of mine is featured in the article and she explains the need for this type of “atheist education”:

Bri Kneisley, who sent her son Damian, 10, to Camp Quest Ohio this past summer, welcomes the sense of community these new choices offer him: “He’s a child of atheist parents, and he’s not the only one in the world.”

Kneisley, 26, a graduate student at the University of Missouri, says she realized Damian needed to learn about secularism after a neighbor showed him the Bible. “Damian was quite certain this guy was right and was telling him this amazing truth that I had never shared,” says Kneisley. In most ways a traditional sleep-away camp–her son loved canoeing–Camp Quest also taught Damian critical thinking, world religions and tales of famous freethinkers (an umbrella term for atheists, agnostics and other rationalists) like the black abolitionist Frederick Douglass.

I think the obvious question that non-non-believers might have is: What do you teach at an Atheist Sunday School?

One Sunday this fall found a dozen children up to age 6 and several parents playing percussion instruments and singing empowering anthems like I’m Unique and Unrepeatable, set to the tune of Ten Little Indians, instead of traditional Sunday-school songs like Jesus Loves Me. Rather than listen to a Bible story, the class read Stone Soup, a secular parable of a traveler who feeds a village by making a stew using one ingredient from each home.

Down the hall in the kitchen, older kids engaged in a Socratic conversation with class leader Bishop about the role persuasion plays in decision-making. He tried to get them to see that people who are coerced into renouncing their beliefs might not actually change their minds but could be acting out of self-preservation–an important lesson for young atheists who may feel pressure to say they believe in God.

It’s a positive piece on atheism in Time magazine!

Not too shabby at all.

Many thanks to Jeninne Lee-St. John, who wrote the article.

The piece also features the picture below (taken by Kathrin Miller) of “Sunday morning at The Children’s Program at the Humanist Community of Palo Alto, California”: 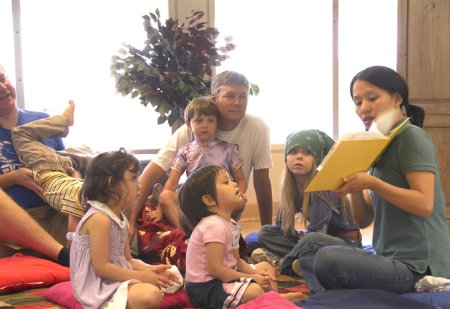 Can someone lend me a child so I can attend these classes?

November 25, 2007
Indiana's "In God We Trust" License Plates
Next Post

November 25, 2007 The Creation Museum of Presidential Libraries
Browse Our Archives
What Are Your Thoughts?leave a comment