From the sublime to the ridiculous, let’s go from haiku to poetry’s highest form, limericks! Create an atheist limerick.

Jared must be psychic or at least our logic flows in the same perverse way because on Contest # 9 he proposed a limerick contest the night after I started working on this. Go Jared!

As you probably know limericks follow a very set pattern, usually iambic with five lines in a rhyming pattern of a,a,b,b,a. I’ll give you an example, (not very good, I admit) to start you off:

An atheist’s outlook is sunny
‘Cause so much of life can be funny.
Without a hereafter
We cherish the laughter
And savor each moment like honey.

Uh-oh the Limerick Muse has been awakened:

A preacher who said, “Gay is sin”
Was caught being naughty with men
He said “I’m straight now,
‘Cause God showed me how.”
Yeah, straight as he ever has been.

Watch out, I’m out of control!

Ted Haggard created a shock
So his churchgoers said, “Take a walk.”
But he said that by livin’
In Christ he’s forgiven
For the sin of misusing his………flock.

The ten funniest or most creative submissions will receive a Friendly Atheist wrist band: 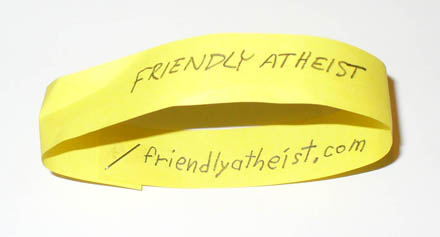 This is the genuine article. Beware of cheap knock-offs.
Judging will be done by the same anonymous mystery people who have judged the other contests. I’m certainly not gonna take responsibility. 🙂
Have fun,
Richard