I Know Waaaay Too Much About Christopher Hitchens November 8, 2007 Guest Contributor

I Know Waaaay Too Much About Christopher Hitchens

One of the captions:

Yes, a Brazilian wax was involved. 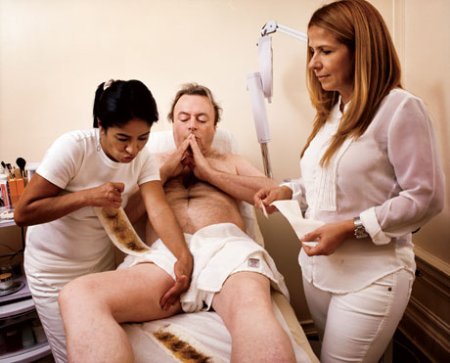 It almost looks as if he’s praying in that picture…

I can anticipate his pain.

No wonder he thinks God is not great.

From the print version of the magazine:

The impression of being a huge baby was enhanced by the blizzards of talcum powder that followed each searing application. I swear that several times [J Sister waxer Janea Padilha] soothingly said that I was being a brave little boy… Meanwhile, everything in the general area was fighting to retract itself into my body…

…By this stage, I thought I could tell we were drawing agonizingly near to the close, but I was wrong. Boy was I ever wrong.

You ladies will know what I mean by the stirrup position, which I was now unceremoniously instructed to assume. That’s to say, I braced one leg up while Ms. Padilha braced the other. And she does this for a living. To be [a dentist Hitchens previously visited for the article] and to spend every day up to your elbows in other people’s oral cavities would be tough enough. But this … And wait: surely you can’t be serious about putting … Oh Jesus. I was overwhelmed by a sudden access of lava-like agony, accompanied by the vertiginous sensation that there was no there there.

November 8, 2007
Can Atheists Participate in the Office Secret Santa?
Next Post

November 8, 2007 Evanston Says No to Mandatory Moment of Silence
Browse Our Archives
What Are Your Thoughts?leave a comment