Blood is Not an Evil November 5, 2007 Guest Contributor

Blood is Not an Evil

Emma Gough gave birth to twins last week. She lost a lot of blood in the process. A blood transfusion would have saved her life. But she said no.

Because she’s a Jehovah’s Witness.

Her husband Anthony, also a Witness, refused the hospital staff’s requests to allow them to give the transfusion. Emma’s relatives denied the requests, too. 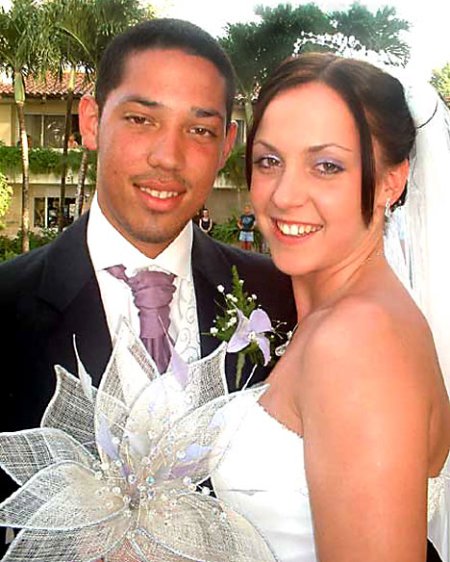 (The picture, courtesy of the Daily Mail, features Emma and Anthony Gough on their wedding day.)

Their best man, Peter Welch, 24, said Mrs Gough’s death had devastated both sides of the family, all Jehovah’s Witnesses.

Mr Welch, of Sutton Hill, Telford, said: “We can’t believe she died after childbirth in this day and age, with all the technology there is.

It’s hard for me to feel sorry for the family. They had the life-saving procedure at their fingertips and said no because of some absurd belief brought on by their religion.

At least one person in the family’s life has a working mind:

… an elderly neighbour criticised the family for sticking to their beliefs.

She said: “How could she make that decision not to have a transfusion and leave those babies without a mother? It’s terrible, I don’t care what your beliefs are, to refuse treatment like that is awful.”

How do you explain the mother’s decision to these children when they grow up?

In medical school, we often discussed scenarios that would pop up when we were doctors and how we would respond to them. In addition, we were taught to respect peoples’ cultures.

When the Jehovah’s Witness scenario came up, the first thought that went through my mind was that their beliefs (at least in regards to the transfusion issue) don’t deserve to be respected. It’s irrational. It’s harmful.

The same thing happened when I read The Spirit Catches You and You Fall Down. There’s no need to respect beliefs that are flat-out wrong when a person’s life is at stake.

The doctors should have the ability to intervene in times like these.

November 5, 2007 Quick: What Are These Kids Doing?
Browse Our Archives
What Are Your Thoughts?leave a comment