Voting for Atheists and Teaching Creationism

In the latest issue of The Economist, there is an article called “Who will take on Hillary?”

The article includes this graph which highlights differences between Republicans and Democrats on several moral/social issues:

Here’s the part that seemed most interesting to me: 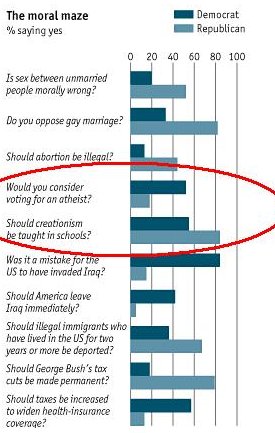 No, it’s nothing you didn’t already know. But it’s still shocking to see it laid out like this. Less than 20% of Republicans would vote for a qualified atheist, and only half of Democrats would do so.

The numbers seem to be flipped when it comes to Creationism: more than 80% of Republicans favor it along with just over 50% of the Democrats. You can’t automatically conclude there is a link between the numbers, but I find it hard to think otherwise.

(Thanks to Brett for the link!)

November 3, 2007 Ministry Purposely Lied to Get Access to Public School Children
Browse Our Archives
What Are Your Thoughts?leave a comment