Which is More Likely?

Being dealt the first hand of 13 cards or the second? 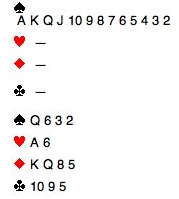 There are 635,013,559,600 possible hands and the chances of being dealt the first hand is just as likely as the second though a common intuition is that the second is far more likely. This I believe is because the second has a more likely distribution of the cards, but we are talking about individual hands not distributions. I think it is the same wrong intuition that people use when presented with the fine-tuning argument for the existence of a designer god, the argument is that the laws and constants of physics are fine tuned and if they were different we wouldn’t exist. To which I answer okay, and what’s your point. Well there must be a designer to have just this set of laws and constants they respond, but like the two bridge hands above it is more likely that it is random.

The faulty analysis comes from the arrogant idea that we are somehow special and that leads us to believe that we can’t be here just by chance, or that it is somehow more likely that there is a designer.

October 27, 2007
Interest in Being a Philosophy Grad Student?
Next Post