Secularist of the Year Goes to Iranian Dissident 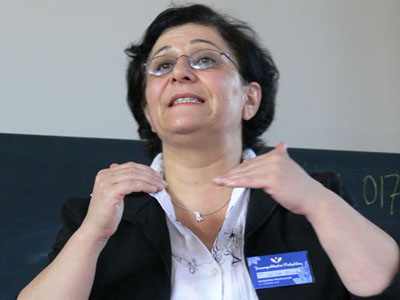 Her story is pretty incredible:

Mina Ahadi started her serious political activities when she was 16 [note: another site says she was 14] and living in Iran. She was at university in 1979 in Tabriz at the time of the Iranian revolution and she began immediately to organise demonstrations and meetings to oppose the compulsory veiling of women. This courageous dissent got her noticed by the Islamic regime’s authorities and soon she had to go underground to avoid retribution.

The end of 1980 her house was raided by the police and her husband and four of their comrades arrested. Mina escaped only because she wasn’t at home at the time. Her husband and the four arrested were all executed by firing squad soon after. She lived underground for some time and then fled to Iranian Kurdistan in 1981, where she continued to struggle against the Islamic regime for the next ten years. In 1990 she went to Vienna. She moved to Germany in 1996 and has lived in Europe since then.

That’s not even getting into the organizations she founded.

Richard Dawkins issued a statement on Ahadi which read:

I have long felt that the key to solving the worldwide menace of Islamic terrorism and oppression would eventually be the awakening of women, and Mina Ahadi is a charismatic leader working to that end.

A religion so insecure as to mandate the death penalty for apostasy is not to be trifled with, and ex-Muslims who stand up and fight deserve our huge admiration and gratitude for their courage. Right out in front of this honourable band is Mina Ahadi. I salute her and congratulate her on this well-deserved award as Secularist of the Year.

You can read a more descriptive story of her achievements at the NSS website.

October 22, 2007 Upcoming Speaking Gigs
Browse Our Archives
What Are Your Thoughts?leave a comment