Unless you think it looks like the former Pope: 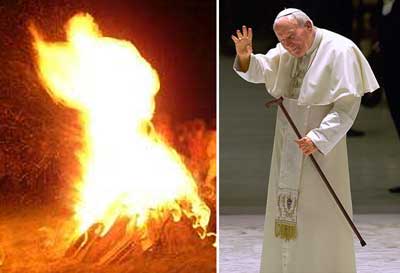 From The Daily Mail:

Service director Jarek Cielecki, a Polish priest and close friend of John Paul II, travelled to Poland after hearing an onlooker had photographed the image.

Father Cielecki said he was convinced the picture showed the former pontiff.

“You can see the image of a person in the flames and I think it is the servant of God, Pope John Paul II,” he said.

The photographer is just as deluded:

Gregorz Lukasik, the Polish man who took the photographs, said: “It was only afterwards when I got home and looked at the pictures that I realised I had something.

“I showed them to my brother and sister and they, like me, were convinced the flames had formed the image of Pope John Paul II.

“I was so happy with the picture that I showed it to our local bishop who said that Pope John Paul had made many pilgrimages during his life and he was still making them in death.”

I would feel so much better if he said, “I know this is just fire, but I figured I could get a rise out of very gullible people.”

And just out of curiosity, does anyone else see an image of Hitler giving the Seig Heil salute?

I’m not comparing the Pope to Hitler. I’m just pointing out that, like a cloud, you can see whatever you want to see.

It’s still fire and not an image of anyone living or dead.

It’s certainly not the return of the Pope.

October 16, 2007 Atheist Shooter?
Browse Our Archives
What Are Your Thoughts?leave a comment