Tell Me Again Why This Isn’t Child Abuse? 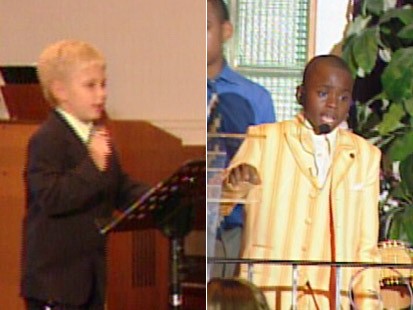 [Seven-year-old] Samuel [Boutwell] is a Baptist preacher at a church in his home town of Brookhaven, a small town in southwestern Mississippi. He also preaches outside in front of the local Wal-Mart, and has preached on the road in Virginia, Louisiana, Tennessee, Washington D.C., and the streets of New York City.

Like many, Samuel said he became a preacher after he was “saved” by Jesus — he just happened to be 3 years old at the time. “After I got saved, I knew I could try to reach more people to try to get saved,” Samuel said. His sin against God? Disobeying his mom. And so the boy turned to Jesus.

And apparently, Samuel is being tutored by Kirk Cameron:

Samuel isn’t the only one, either. Other kids in the article are featured as “pint-size preachers.”

Their parents say they had nothing to do with this. Even though Samuel’s dad is a born-again preacher himself. And another child preacher’s grandmother is a pastor who “taught him much of what he knows about preaching and touching people to take away their pain.”

Samuel often preaches outside abortion clinics. He said he knows what an abortion is and that he’s seen pictures of abortions. “Women going in and they kill their child. I’ll tell you the same thing I told my daddy one time: If they don’t want to have their child they can give it to someone else,” he said.

When asked if he knows how babies are made, Samuel said that he doesn’t.

This kid’s either going to become the next Jerry Falwell or the most rabid atheist you’ve ever seen.

Either way, it scares me.