One More Reason to Have Children October 10, 2007 Guest Contributor

One More Reason to Have Children

You can read them Onion Breath: 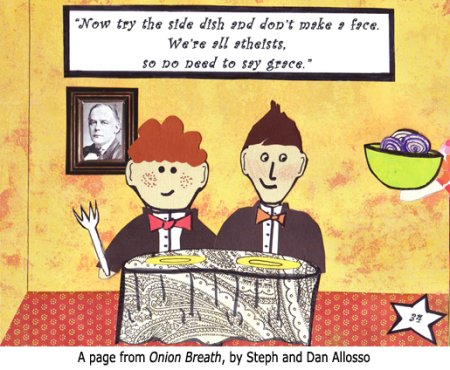 The book is about two boys named Roy and Eugene. According to one Amazon reviewer:

Onion Breath tells the fun story of two brothers who are fussy eaters, refusing anything but mac-and-cheese. Mother does not know how to get them to eat new things, but Shmirna, the nanny, does. Shmirna tells the boys that spiders crawl into their open mouths at night, and the only way to stop the spiders is having onion breath by eating something new – onions. The macabre gambit works, and the boys learn the value of trying new things.

It’s not a book about atheism, but the characters in the book “just happen to be atheists.”

Amanda Metskas says that the book, by Steph & Dan Allosso, was a hit at the mini-Camp Quest at the Atheist Alliance International convention.

She writes this about the book in the latest Humanist Network News:

One way I think it will help [normalize atheism] is that kids from non-religious families can add a story about an atheist family to their bookshelves. Whether it helps normalize atheism in broader society will depend on it being carried by libraries and bookstores, and being read by families who do not identify as atheists.

There are several other positive qualities also found within the pages:

The story is a fable about trying new things, a topic to which a lot of kids and parents can relate. It seeks to normalize atheism, and it also challenges gender stereotyping; when Roy and Eugene ask Shmirna to teach their future wives to cook, she replies that she will teach the boys now instead.

Amanda leaves us with this:

I highly recommend this book to parents, regardless of their worldview, who are looking for a fun story to read with their kids. It is probably best suited for kids ages five to ten. For more information about the book visit http://www.onionbreath.net