At the Atheist Alliance International convention, I had a chance to meet several prominent leaders and speakers in the atheist community.

One of them was Mike Estes: 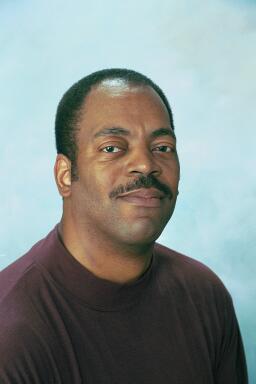 Mike is a member of the Atheist Coalition of San Diego. He has given wonderful presentations on African-American atheists in the early 20th century. It’s fascinating to find out how non-religious the black leaders were at the turn of the century when you consider how religious most are today.

If you get a chance, download and listen to the interview (MP3) he did on the Infidel Guy show.

Here is my interview with Mike:

Hemant: What led to your interest in studying the freethinking aspect of African-American history?

Mike: About twenty years ago, I came across the February 1987 issue of American Atheist magazine, which contained articles on black atheists under the theme “Atheists of a Different Color: The Minority’s Minority.” Upon reading that, I was fascinated, and needed to know more. Up to that point, I hadn’t known about any other black atheists other than myself; after that, I felt less like an island, and more like part of an archipelago [smile].

Hemant: Which African-American’s atheism surprised you the most?

Mike: I would say James Weldon Johnson, (among his many achievements) the first black Executive Secretary of the NAACP, and a major figure of the Harlem Renaissance. He wrote the lyrics of the song “Lift Every Voice and Sing,” which contains several references to a god and is now regarded as the unofficial “Black National Anthem.” His published writings include several collections of Negro spirituals and poems. His written works are very much in tune with the spirituality that is so integral to African-American culture, yet he wrote them all as an atheist! It’s only when you read his autobiography Along This Way that you discover his personal lack of religion; the last two pages of that work are the best succinct discussion of the topic I have seen thus far. I’m very much impressed with Johnson’s philosophical sophistication and self-assurance, reflected in his ability to understand and respect the spirituality in black culture while not subscribing to it personally. That’s something I try to emulate; he’s set a great example.

Hemant: Even in African-American history classes, they don’t talk about the non-religious background of black leaders. Why is that?

Mike: I think it’s not so much a conscious act, but rather a by-product of the prominence religion has in American culture in general and African-American culture in particular. There are many more ways in which the religious background of a person can manifest itself in historical accounts, hence many more ways in which it, as opposed to freethought, can get mentioned in conjunction with something not explicitly connected with religion. For example, people had religious visions, were involved in churches, were priests and ministers, and used “spirituality” and other religious concepts to express themselves. Thus far there’s no real freethought equivalent of these things, so there’s very little chance of a person’s non-religious background manifesting itself in historical accounts unless you’re focusing specifically on a person’s lack of religiosity.

Hemant: I often get the feeling like I’m a double-minority. I’m brown and an atheist. You’re black and atheist….does that help you or hurt you when spreading your message?

Mike: I really hear what you’re saying about feeling like a double minority! In terms of helping or hurting, it does both. It helps in the sense that, as a black atheist, I’m a bit of a novelty, so I get a little more attention and interest than I otherwise think I would get. It hurts in the sense that I get pigeonholed by many white atheists who want my thoughts on issues and topics concerning African-Americans, but don’t really ask me about anything else. Sometimes it’s hard to avoid the feeling of being “rented,” and for those not familiar with the term, it comes from Damali Ayo’s book and website How to Rent a Negro (no, I don’t know the author).

Hemant: Do you see atheism becoming any more acceptable in the black community in the near future?

Mike: No. As freethought and atheism continue to get more exposure, I think more black folks will find them acceptable on an individual basis. I don’t think they will become more acceptable anytime soon on a community level, though, because religion is still too integral a part of the social and cultural infrastructure around which the black community is built. I think that freethought needs to develop its social and cultural infrastructure a LOT more before it will become more acceptable to black society (and American society) as a viable alternative.

Hemant: What led to your own atheism?

Mike: Well, my father was something of a religious skeptic, and by his example he planted in me the seeds of skepticism, and a love of science. Then at age twelve I read The Autobiography of Malcolm X, which contains come scathingly effective criticisms of Christianity, especially as they apply to black folks. But instead of turning to Islam, as Malcolm X advocated, I began to question religion as a whole. Reading Introduction to African Civilizations by John G. Jackson gave me permission to question established “truths,” think freely, and break free of the paradigms imposed upon me by the larger society. Even then, it took another ten years for me to finally accept that, as far as I can tell, gods do not exist; and to develop a personal worldview that does not include them.

Hemant: Not everyone will get a chance to watch your excellent presentation. However, what would you like readers to understand about it? What pieces of information are most important for them to know?

Mike: I created this presentation primarily to share my pride in, and appreciation of, the extraordinary men and women that I mention—and many others that time prevent me from mentioning. They are true heroes and heroines whose achievements should not be lost to history. I would also hope that the freethought community might gain a greater respect and appreciation of the black experience in America; as a corollary, there is much that the freethought community can learn from the lessons of the civil rights movement, and apply to its own. And lastly, I would hope that knowing what these folks were able to achieve in the face of the most virulent kind of racial intolerance might inspire atheists and other freethinkers as we face the (much less virulent) religious intolerance of today.

Hemant: What can the atheist community do to get more minorities involved in the movement?

Hemant: Is your powerpoint presentation available anywhere online? How can groups who wish to see your presentation contact you?

Mike: No, it’s not available anywhere online, and unfortunately, I don’t have any plans to make it available online any time in the near future. If anyone wants to contact me about giving the presentation to their group, I suggest they do so via the website of the Military Association of Atheists and Freethinkers. MAAF President Jason Torpy was kind enough to include me as part of the speakers’ bureau there. Thanks for asking!

October 10, 2007 “Listen little girl…you’re really cute and all, but I don’t believe in Jesus.”
Browse Our Archives
What Are Your Thoughts?leave a comment