James Watson, the co-discoverer of the structure of DNA and Nobel laureate (as in “Watson and Crick”), was in Chicago tonight! 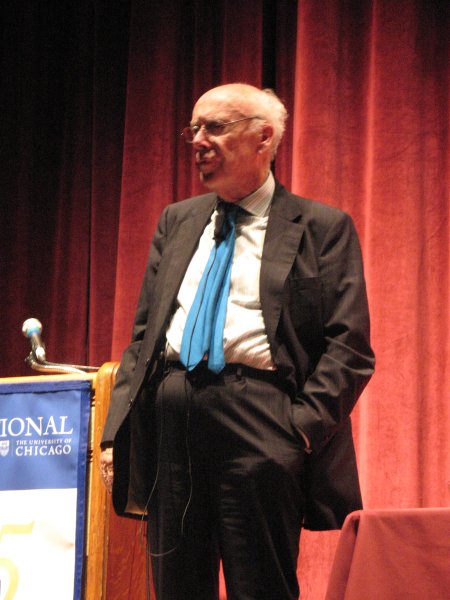 I learned a couple pieces of trivia:

Watson was in Chicago promoting his new book Avoid Boring People: Lessons from a Life in Science. He mentioned that he was played by Jeff Goldblum in the movie The Race for the Double Helix. But if his new book ever gets made into a movie…

“I want to be played by Sacha Baron Cohen.”

He also said if the new book got into the hands of politically correct reviewers, he would be “sunk.” He made a ton of un-PC remarks all night. They were hilarious. I mean, how often do you hear someone rip on Erwin Chargaff? (He was unpleasant, we were told.)

Or how often are you told that, since the sperm of younger men is more potent than that of older men, we may want to consider storing our sperm at the age of 13?

There were words of wisdom, too. Aspiring researchers were told to pursue fields in which they could be pioneers (“Don’t get in a race with twenty horses”). Also, Watson said it’s good to talk to your competition; they might be the only people interested in what you are doing.

Watson had a lot to say in response to questions about faith. He said he has no need for religious explanations for anything; they divert you from the true answers:

“I think that’s crap. There’s no other word for it.”

He later added (tongue-in-cheek) that religion is great for people whose lives are hell (in other words, they have hope of an afterlife).

The best part of the night came when Watson was asked about who he sided with: Evangelical scientist Francis Collins or ultra-atheist scientist Richard Dawkins.

Watson said Dawkins was a friend of his. But when he was asked to write a blurb for the back of The God Delusion, he was worried. Watson said (jokingly, I think) that he didn’t want to get shot. So he wrote something so dull that Dawkins couldn’t use it.

What did he think about Francis Collins’ book, The Language of God?

“His book is trash.”

“He says he believes in miracles. That’s inconceivable!”

And when it came time for the book signing, I had Watson sign the two copies of I Sold My Soul on eBay that have already been signed by several atheist luminaries. (The books will eventually be auctioned with proceeds going to atheist groups.) 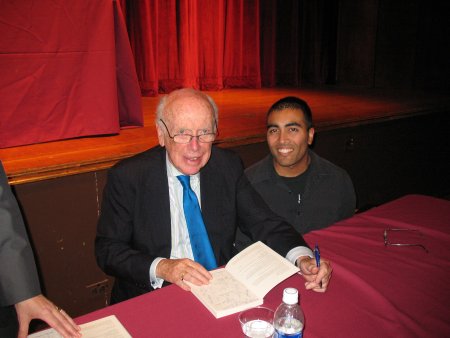 I swear I’m kneeling in that picture.

And because that’s not enough, I handed the printed-out two-page copy of Watson’s original DNA structure article (PDF) to a friend. Just so I wouldn’t overwhelm him. Watson signed both pages 🙂