Sue the Priest for a Bad Sermon October 3, 2007 Guest Contributor

Sue the Priest for a Bad Sermon

Last year, Angel R. Llavona went to church and was unhappy with the sermon.

So he called up the pastor, Rev. Luis Alfredo Rios, and left a message:

“I attended Mass on Sunday and I have seen poor homilies, but yesterday broke all records.”

The pastor, unable to take criticism, played that message for the congregation. He then said the following:

Llavona had to change churches. He said “the incident amounted to defamation, intentional infliction of emotional distress and public disclosure of private facts.”

It even made the front page of the Chicago Sun-Times: 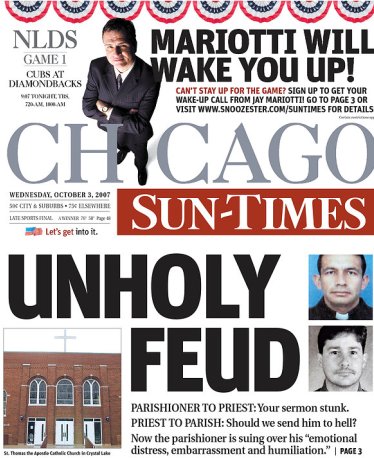 So if you want to get rich, just call your pastor and tell him you weren’t satisfied with his sermon last Sunday. Then *dare* him to play the message to the congregation.

He’ll play your message and call you an angry, evil “atheist.”

An “atheist”?! How could he!? That’s defamation, you say. He just called you untrustworthy.

The money will start rolling in after that.

You may want to have your lawyer waiting in the wings.