At the Atheist Alliance International Convention, I had a chance to speak with several prominent leaders and speakers in the atheist community.

Pastor Deacon Fred was not one of them.

He is the head of the satirical Landover Baptist Church.

The picture below shows Fred (right) during the moment of realization that rapper Greydon Square is black: 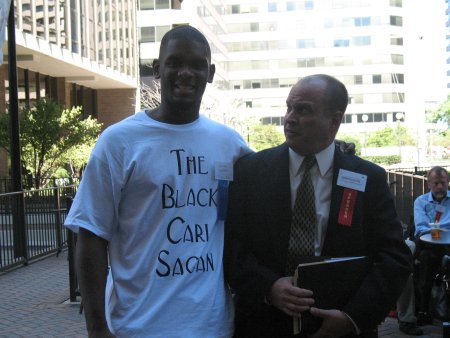 The pastor spoke with me via email before the conference:

Hemant: Will you be getting your own private jet like Benny Hinn?

Pastor Deacon Fred: The Bible teaches Christians that flying horses won’t be used as a means of transportation until after the Second Coming of Jesus Christ, so – until then we are forced into using private ministry jets to accommodate our travel needs. The Landover Baptist Church owns a half dozen ministry jets. I have my own Super Jumbo Jet, “Gabriel’s Wings.” It is an absolute joy to travel for Jesus in this luxurious aircraft. I recently had all 355 seats removed and replaced with a full blown sanctuary. There is also a baptismal pool on board which doubles as a trout fishing pond during long flights. All of this, of course is tax-free. I’d like to take a moment to thank you for your help in providing me and Pastor Benny Hinn with our private ministry jets. Our Churches and ministries survive through Godly contributions to the U.S. Federal government from even hell-bound fools like you and your readers. Glory!

Hemant: Should we teach Intelligent Design in our Science classes?

Pastor Deacon Fred: As I am fond of saying, “They don’t call it Science Fiction for nothin’.” I wrote a little book a few years ago that makes it easy to understand the origin of the species. And you don’t have to rely on silly facts, data, or even research to know the truth. The book is called The Talking Snake Theory. You see, when American children go to school, they are presented with all sorts of different theories. One theory might be that the earth is flat and has four corners; the other might be that the earth is round. Teachers need to let students decide for themselves, and Intelligunt Desine provides godless students with a Godly alternative to Science Fiction.

Hemant: Is the membership for Landover Baptist Church growing?

Pastor Deacon Fred: Our church currently has over 157,000 members on our beautiful campus in Freehold, Iowa. We have several Gated Christian Communities – Leviticus Acres and Exodus Landing to name two. We also have private golf courses, spas, Christian malls, a fully equipped Baptist police force, and a Christian amusement park with Red Sea World. So to answer your question, is our membership growing? Of course it is! It is THE place where the worthwhile worship! Why, just to hear me stand up and preach on Sunday morning in our 35,000 seat main sanctuary – there is a two year waiting list. Tickets are currently only $75 per person, so get yours today before the price hike next year. Praise Jesus!

Hemant: Should slavery be reinstated?

Pastor Deacon Fred: Quite simply, the answer is yes. And let me tell you why. Jesus never spoke a sour word about slavery except when he gave us handy tips on how we should clean and care for our slaves. So, obviously if Jesus doesn’t have a problem with it, neither should the folks who follow Jesus! Just think, we could really solve this illegal immigration problem very quickly if they’d just start selling these Mexicans to the highest Christian bidder. Lord knows, we could use the free labor to build the new East Wing of the Landover Baptist Creation Science Research Center.

Hemant: Who are you endorsing for president?

Fred: I am certainly not endorsing anyone who will be out of commission for 3-5 days a month. Woman was created from a part of man – a rib bone! They are not men – they are WO (True Christian™ meaning: underneath, less than, not equal to) MAN. They certainly have no business in public office. So Hillary Clinton, and Osama Bin Obama (for obvious reasons) are out.

We’ll be providing a Christian voter guide at our church before the elections so you can see who I’ll be endorsing. Each election year I tell all of our church members, “Vote for so-and-so or find yourself another place to worship. I think we have about 4-5 Bush boys left, so we should be good for another 40-years. We don’t know enough about the other candidates yet, but you can bet – the candidate that will be on Landover’s ticket will believe in Jesus Christ, the Virgin Birth, and Intelligent Design, be pro-life, and will believe that stem-cell research is an experiment cooked up in the Devil’s kitchen.

Hemant: When is Jesus coming back?

Pastor Deacon Fred: Jesus once said to his disciples, “this generation shall not pass away until before I drop back in on ya’ll (Matthew 24:34).” He even said that some of his disciples would not taste death until He returns (Matthew 16:28). If we take the Lord’s predictions at face value, we can estimate that he is roughly 1,970 years late – give or take a few years. As Christians though, we are exempt from having to live our lives based on logic or reason, so we just find new ways to press the numbers. You see, figuring out the exact date of Jesus’ return is sort of like a crap shoot. After all, the Bible tells us that He will come like a thief in the night (II Thessalonians 2:3,6-7), and that no man knows the day or hour (Matthew 24:36). So, my advice is to just sit tight and pray you are not caught on the toilet when He shows up at your front door. In other words, live your Christian life in constant fear and cover your soul with Godly paranoia, knowing that Jesus’ head could pop up around the next corner and the first thing He’d say is, “Gotcha!”

Hemant: Can you tell us about your expulsion from Jerry Falwell’s Liberty University?

Pastor Deacon Fred: Dr. Falwell and I had a disagreement regarding an important theological issue. Our positions on the nature of pre, post, and mid-Umbilicism were extremely different.

Umbilicism is the study of the formation of Adam’s belly-button. Some True Christians™ dedicate their entire lives to this theological discipline. In regard to Dr. Falwell, what you need to understand from the outset is that most Baptists are pre-Umbilicists, they believe that Adam’s belly-button was formed during the time when God made the first man out of dirt. I’m a post-Umbilicist – I don’t believe that Adam, or his lesser helpmate, “Eve,” for that matter – ever had belly buttons. This is consistent with maintaining good Creation Science. Intelligent Design rests its very foundation on post-Ubmilicism. Then there are the “mid-Umbilicists,” who believe that Adam’s little lint trap was formed when God pulled a rib out of his stomach to make the first woman. That’s “fuzzy Creation Science,” in my opinion.

In any case, I was expelled from the Liberty University School of Life Long Learning where I was getting my Doctorate’s in Epistemology through audio cassettes in a one-month course. I was asked never to return, and labeled a heretic. Dr. Falwell and I still remained dear friends and golfing buddies until he went home to rest his head in Jesus’ lap not too long ago.

Hemant: How long would it take for you to convert me?

Pastor Deacon Fred: I can win your soul in under thirty seconds with half a verse from the Old Testament, while at the same time, riding a unicycle and drinking a glass of lemonade and balancing a 10LB KJV 1611 Bible on my head. Some folks say I could sell a sin to Satan. That’s how good I am. Oh, and the warm muzzle of a handgun to the small of your back will certainly help speed up the process. Praise Jesus!

Hemant: Are you worried about the rise of “The New Atheism”?

Pastor Deacon Fred: The New Atheism? If by this, you mean the new science worshipping cult led by the false prophet, Richard Dawkins? I’m not worried a bit!

I think most Americans are Christians and most of us believe that Atheists are crazy. The very word, “Atheism,” itself sounds like a mental disease. Your brains are clouded by logic. I look to a day when you folks will be locked up in loony labs and studied and poked at by Creation Scientists ‘til you confess the existence of our flying God-man, Jesus Christ! And you nut cases have the audacity to call Christians crazy? If you define crazy as believing a virgin gave birth to the son of an invisible sky-dwelling deity and that boy had powers that enabled him to walk on water, cure leprosy and blindness with a flick of his wrist, and transmutate water into reserve quality wine. And if you further say we’re crazy because we base our whole lives around a belief that the man was dead for three days, got up and crawled out of his tomb with the help of a couple of his dad’s winged servants before he floated off into the clouds himself, like an untethered balloon, well… then color us cuckoo! Praise Jesus!

Hemant: Let’s play some word association. What’s the first thing that comes to mind when I say the following? 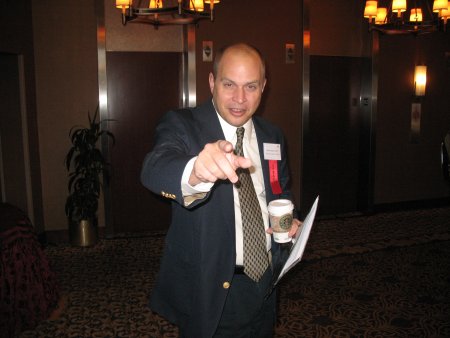 October 1, 2007
My City Embarrasses Me... and Not Just Because of Rex Grossman
Next Post

October 2, 2007 I Love Surprise Magazine Subscriptions
Browse Our Archives
What Are Your Thoughts?leave a comment