It’s one thing to not stand up during the daily Pledge of Allegiance recital in high school. It takes balls to do that in most places.

But to get 50 of your classmates to do it with you… that’s just freaking phenomenal:

“Boulder High has a highly diverse population, not all of whom believe in God, or one God,” said Emma Martens, a senior and president of the [Student Worker Club], which has about a dozen members.

“We didn’t think it was fair for the whole school to have to listen to it. It’s almost religious oppression,” she said. 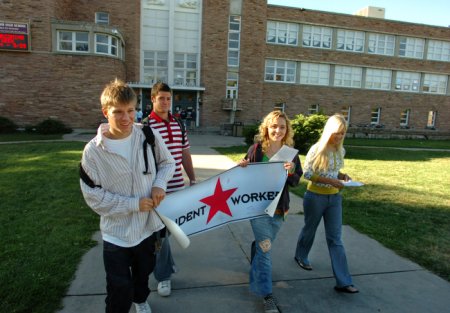 The 50 students left class and recited their own God-free Pledge:

“I pledge allegiance to the flag and my constitutional rights with which it comes. And to the diversity, in which our nation stands, one nation, part of one planet, with liberty, freedom, choice and justice for all.”

The principal isn’t getting rid of the pledge, but he supports the students:

Principal Bud Jenkins told the Camera newspaper on its Web site Thursday the pledge will not be moved, but added he was proud of the students for standing up for their beliefs.

It was not immediately clear what discipline, if any, the protesting students would face.

Check out the video: